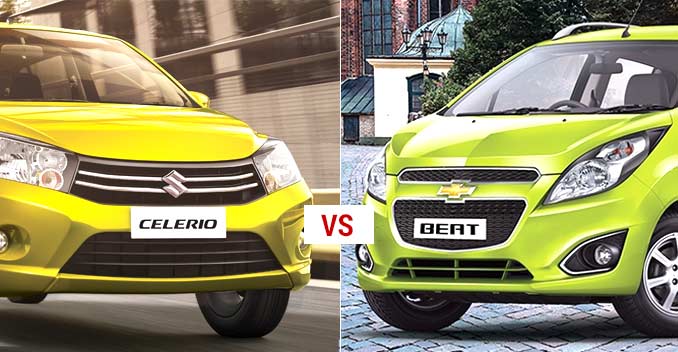 The competition in the small car segment has got even more fierce with the entry of much awaited Maruti Suzuki Celerio in the price range of Rs 3.90 lakh to 4.96 lakh (ex-showroom, Delhi). As expected, the car has been doing phenomenal in terms of sales, with over 1000 bookings per day. So, to help choose the best car between Maruti Celerio and Chevrolet Beat, NDTV Auto brings you a brief comparison between the two cars, based on four most important factors- design, engine, mileage and pricing.

Chevrolet Beat is no doubt one of the closest competitors of the Celerio, specially because of the price point and engine size. Now when, the Beat has recently received a mid-life facelift, buyers have an option to consider that as an option over Celerio.

When it comes to design, Chevrolet Beat has an upper hand over others in competition including the Celerio. While the Chevrolet Beat with several cosmetic updates both inside and out, manage to look even better. The Celerio on the other hand, despite having a completely new design is not-an-exceptional looking car. With new automatic head-lamps, revamped front bumper with re-designed fog lamp, new front grille with a bigger bow, ORVMs with integrated turn indicators make it look more outgoing and stylish than its predecessor. The rear too sees a revision with new tail-lights, new spoiler, high mounted stop light and redesigned rear bumper. So, an already stylish looking Beat has received several positive changes, which turn the car into a better-looking vehicle.

On the other hand, Maruti Suzuki Celerio is basically the next-generation A-Star, with improved styling and design. Based on the company's 'Curve in, Curve out' (CICO) styling, the Celerio manages to look curvier and bolder than the car it replaces. The front fascia of the car looks entirely new with curvy wide grille with edged swept black headlamps, bumper with a large air dam and bonnet with character lines. The rear of the car has a great resemblance with the Alto 800. So, on the whole, it's a better designed car than the A-star with contemporary touches, but it is still not one of the best-looking cars out there in the market.

Verdict- On design front, it's the Chevrolet Beat that scores more than the Celerio.

Buyers' preference in India is gradually shifting from mileage to performance, though, the fuel economy will always be one of the most important factors, which decide the destiny of a car in our country, specially when it's a small car.

Maruti Suzuki Celerio has the same 1.0-litre K-series petrol powertrain, which used to power the A-Star, and is found under the Alto K10. But, in the case of Celerio, it has been tuned for better fuel efficiency. Also, the car has been introduced with the segment first Automated Manual Transmission, which the Maruti Suzuki India calls 'EZ Drive'. This transmission is essentially a manual transmission with an automatic clutch. So, the clutch has been removed from the car, as the transmission changes it on its own, just like a regular automatic transmission.

The car still needs an improvement in insulation, as the tyre noise is clearly audible, which was also an issue with the A-Star, And it becomes irritating, if the car is drive for over a long duration. The engine churns out a maximum power output of 67bhp, while yielding 90Nm of peak torque.

On the contrary, the Chevy Beat petrol with 1.2-litre, 16V Smartech engine, has better power-to-weight ratio than the Celerio, with much better pulling power. This engine produces a peak power output of 79.4bhp at 6200rpm and 108Nm at 4400rpm. This engine performs good in mid RPMs, though it feels lack of power at high RPMs.

Verdict- In terms of engine power and overall performance as well, the Beat outsmarts Celerio.

There is no denying that Maruti Cars top the chart in this department. And the newly launched Celerio is no exception here. What is more interesting is to know that Celerio's semi-automatic version returns more mileage than the manual transmission one. While the manual returns an impressive 22kmpl of mileage, the AMT powered Celerio returns a class-leading 23.1kmpl.

Chevrolet Beat for a long time has been branded as the 'most fuel efficient car' of its league, but that's the case with their diesel engined version. The 1.2-litre Smartech petrol powered model is lesser frugal than the new Celerio. However, with an ARAI certified mileage of 18.6kmpl, the car won't disappoint its buyers, considering a more powerful engine that it has, when compared to the Celerio,

Verdict- If fuel economy is your prime concern, the all new Maruti Suzuki Celerio is the car for you.

When it's a small car, pricing really matters, and there are a very few automakers that can compete against Maruti Suzuki India on the pricing front. Maruti Suzuki Celerio is no exception here, which starts at Rs 3. 90 lakh, while the AMT-equipped version comes at ₹ 4.29 lakh. Chevrolet Beat petrol , on the other hand, comes in the price range of Rs 4.06 lakh to 5.25 lakh. So, on the pricing, both the cars are almost on the same level.

Verdict- If you want to buy a more fuel efficient car at an affordable price, Maruti Celerio could be the one. While, if a small car with decent power output and mileage figures at a competitive price, the Chevrolet Beat proves to be a good value for money car.