The Mahindra Signature Edition bears the company chairman Anand Mahindra's signature and gets a host of cosmetic upgrades, to celebrate 70 years of the CJ3A. 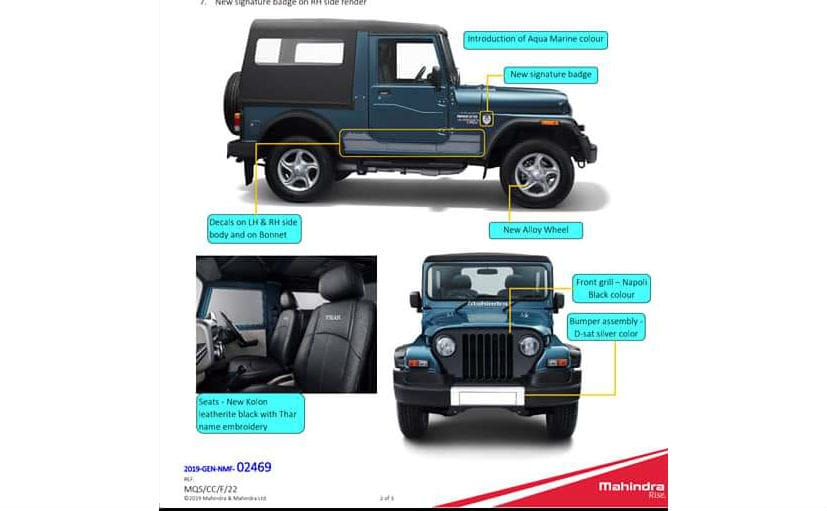 The current generation Mahindra Thar is heading towards the end of its lifecycle. We did bring you a number of spy shots of the next generation model being tested, but the current Thar has its own charm. In what would be a fitting send off to the off-roader, Mahindra will roll out the Thar Signature special edition of the model soon, details of which have now been leaked. The new Mahindra Thar Signature Edition celebrates 70 years of the Mahindra CJ3A off-roader, and gets plenty of changes to give it a special touch, with production to be restricted to just 700 units. The limited edition model will also help clear inventories of the older model ahead of the BS6 deadline scheduled in April 2020.

With respect to the Mahindra Thar Signature Edition, the off-roader has been upgraded with the Aqua Marine paint scheme, borrowed from the Mahindra Marazzo, while the front grille has been finished in black. There are additional decals on the sides, while a Signature Edition badge has been placed on the right hand side fender that bears Mahindra Group Chairman, Anand Mahindra's signature, which probably explains the name. The bumper assembly too gets a new silver paint finish on the metallic sections, while there are new alloy wheels as well borrowed from the previous generation Mahindra Scorpio. The Thar Signature Edition also gets ABS as standard, in a bid to comply with the new safety norms that mandate the feature. Inside, the Signature Edition gets new Kolon leatherette seat covers for the driver and passenger. 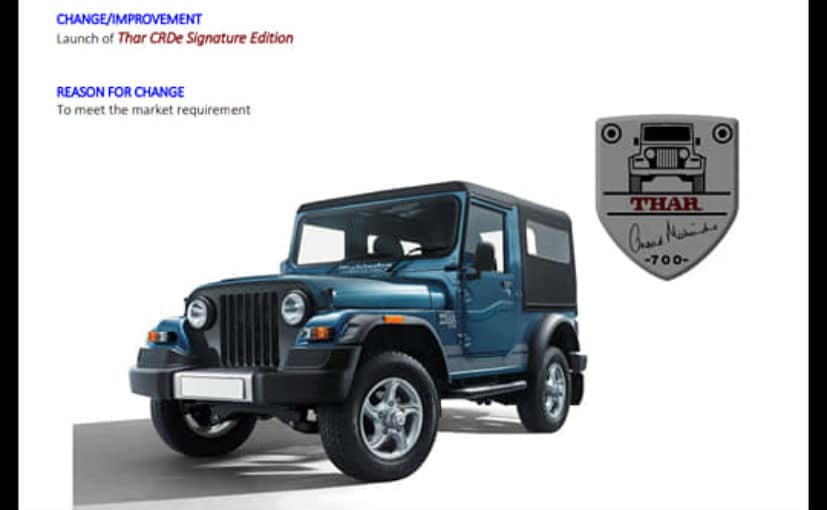 Apart from ABS, there are no mechanical changes on the Mahindra Thar Signature Edition. The special edition off-roader is only available with the 2.5-litre CRDe four-cylinder, turbocharged diesel engine tuned for 105 bhp and 247 Nm of peak torque. The motor is paired with a 5-speed manual transmission, along with a low ratio 4x4 transfer case and a rear locking differential.

The Mahindra Thar CRDe is priced at ₹ 9.50 lakh (ex-showroom, Delhi), while the Signature Edition is expected to be priced at a slight premium. The automaker is likely to introduce the limited edition model in the coming weeks.