The MG Hector is the first connected car in its segment and will be offered in four variants and with three powertrain options. The Hector is also competitively priced and gets a premium cabin and everything together make an impressive package. 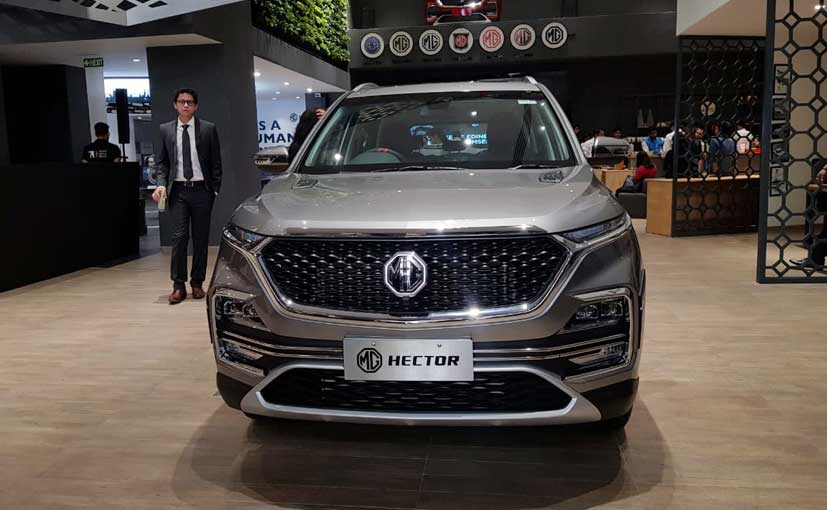 View Photos
The MG Hector will be offered with a range of drivetrains and gearbox combination.

The MG Hector has been one of the most anticipated launches of this year. MG Motor had revealed almost everything about the Hector in a series of events but we still awaited the prices. Now the company has announced the price of the MG Hector and it starts at  ₹ 12.18 lakh  (ex-showroom, India) going all the way up to ₹ 16.88 lakh. These prices are introductory. The MG Hector SUV will be available in four variants- Style, Super, Smart and Sharp and of course it is the first connected car in its segment. The company has kick started operations with 120 centres for the convenience of its customers. This figure will go up to 250 in September. The connected car tech remains the magnum opus and MG Motor has left no stone unturned in its promotion, be it the 'Internet Inside' badge on the fender and tailgate or Benedict Cumberbatch talking about connectivity features in TV commercials or conducting a mega event for its technology demonstration.

MG Motor has priced the Hector very aggressively and that makes it a really strong competition in the segment. Having said that, these are just introductory prices and it will be interesting to see how aggressive they remain after the hike. In the marketplace, the Hector SUV will rival the likes of the Hyundai Creta, Jeep Compass and Tata Harrier along with the upcoming Kia Seltos.

The MG Hector is the first connected car in the compact SUV segment.

The MG Hector SUV packs-in the best of connected car tech Indian customers have seen so far. The vertically-mounted 10.4-inch screen comes with pre-loaded entertainment content and allows you to manage complete vehicle settings and some more. The system offers features like - Real-Time Navigation, Remote Location, Geo-Fencing, Emergency Response and Indian accented voice assist for a plethora of features. The software is updated via over-the-air (OTA) downloads like firmware and features updates like any updates. The MG Hector also comes with pre-loaded apps like - TomTom IQ Maps, Gaana Premium, and AccuWeather app among others. The system also comes with a first machine-to-machine embedded sim, along with the SUV Internet Protocol version 6 which makes it 5G-ready. The e-Sim will be provided by Airtel and MG Motor will give internet connectivity for free until the SUV is under warranty period. That said, the MG Hector SUV oozes in the features department as well and scores really well with plenty upmarket features. It gets a panoramic sunroof, premium sound system by Infinity, Electronic Stability Program (ESP), Hill Assist, cruise control, MID, powered seats and wing mirrors and powered tailgate among others.

The design and outline of the MG Hector looks more American and the face looks butch dominated by the massive mesh grille.

Moving to its looks, the design and overall silhouette of the Hector are definitely something buyers in this segment will admire. Though MG is historically a British brand, the outline and impression of the Hector are more American. It has a butch looking front which is dominated by a massive black mesh grille with sleek chrome surroundings and MG has adopted the new, in-trend design where the headlamp assembly is mounted in the bumper and the daytime running lights (DRLs) are positioned at the top, close to the hood. The dimensions of the MG Hector SUV are a size plus for its segment and it has the largest footprint in its segment at 2750 mm and it is 4270 mm long, 1835 mm wide and 1760 mm tall. On the inside, it gets an all-black treatment and the upholstery is finished in soft-touch leather which feels good. The design of the dash and central console looks minimalistic which is majorly due to the enormous touchscreen which eliminates many buttons. The longest wheelbase has also translated into a spacious cabin.

There will be three powertrain options and gearbox options to choose from on the MG Hector SUV. The diesel variant will be powered by the Fiat-sourced 2.0-litre engine which churns out 168 bhp and 350 Nm of peak torque and is mated to a six-speed manual transmission as standard. The petrol variants will get the 1.5-litre, four-cylinder turbo petrol engine which is also mated to a six-speed manual transmission and develops 141 bhp and 250 Nm of peak torque. However, MG is also offering the same 1.5-litre engine with a 48 Volt mild hybrid system which is mated to a six-speed dual-clutch transmission (DCT). A 48-volt lithium-ion battery helps store energy and provides 20 Nm of extra torque when required. The combination also helps in reducing emissions by up to 12 per cent using three key functions - Engine Auto Start-Stop, Regenerative Braking and E-Boost. MG Motor is also planning to launch the seven-seater version of the Hector next year.