With the 12th win of the season in Valencia, Marc Marquez scored 420 points - the highest by any rider in a single season in the history of MotoGP. 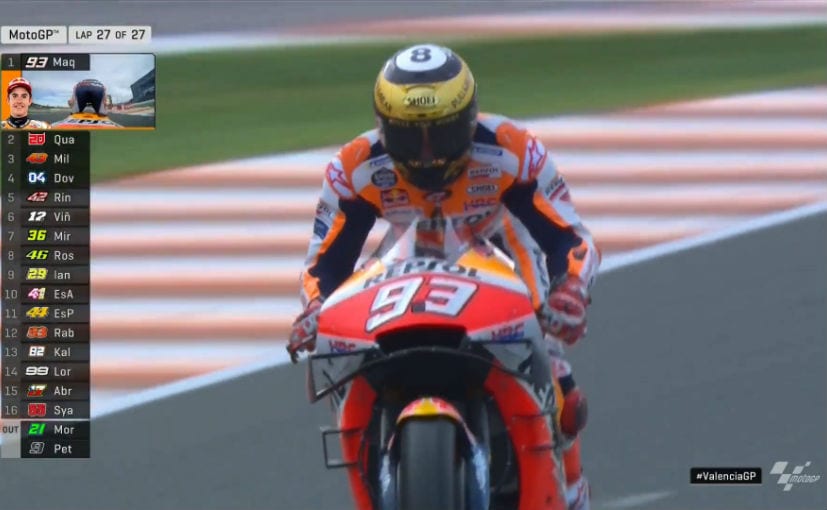 Marc Marquez bagged his 12th win of the 2019 MotoGP season with the Valencia Grand Prix, collecting a total of 420 points, the highest by any rider in a single season. The win also helped team Repsol Honda secure the 2019 MotoGP Constructors' title. Following Marquez was pole-sitter Fabio Quartararo who finished second on the podium, followed by Jack Miller of Pramac Ducati taking the final spot. The podium finish also helped Quartararo take fifth place in overall standings ahead of Danilo Petrucci of Ducati with a total 192 points, behind factory riders Andrea Dovizioso of Ducati, Maverick Vinales of Yamaha and Alex Rins of Suzuki. 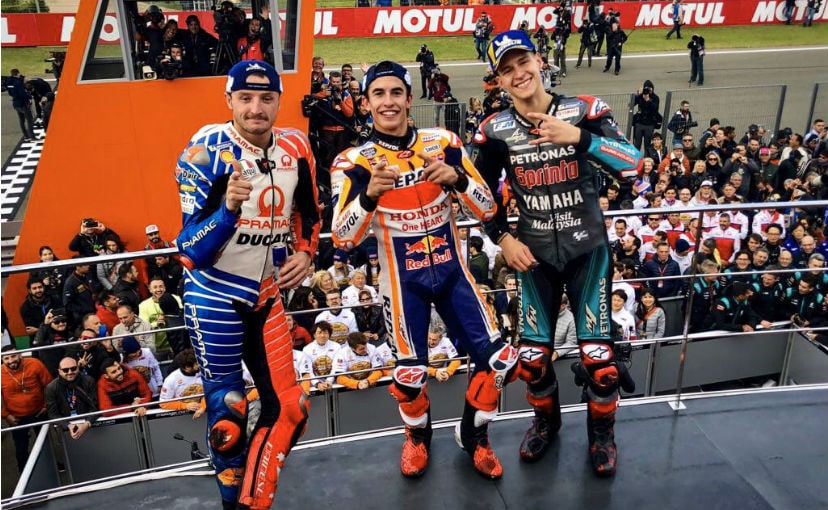 On the podium - Marc Marquez, Fabio Quartararo and Jack Miller

The Valencia GP started with Jack Miller taking the lead on the opening lap as Quartararo moved into P2 after starting on pole, while a slow for Marquez saw him struggle and push down to P6. Quartararo was quick to take the lead from Miller on Turn 2 and held on to it for the next seven laps. The 2019 champion, meanwhile, started working his way up the order as he passed Rins and Dovizioso on Lap 2 to take P3 and didn't take long to pick off Miller. He was now just under a second of Quartararo.

With the difference of just 0.7s, Marquez played his moved on Turn 11 of Lap 8 to pass the Petronas Yamaha rider. The Honda champion was now half a second clear of Quartararo and the rookie of the year ensured to not increase that gap further. Nevertheless, Marquez stretched his lead to one and a half seconds with six laps to go. Miller was now hot on Quartararo's tail down to just 0.6s but didn't find the pace to overtake the Petronas rider.

Marquez cleared the chequered flag 1.026s ahead of Quartararo, while Miller was a distant third 2.409s behind the race leader. Dovizioso managed to take P4 ahead of Rins, while Vinales took P6 ahead of Joan Mir on the second factory Suzuki. Yamaha's Valentino Rossi took P8, with brothers Aprilia's Aleix Espargaro and Pol Espargaro on the KTM taking the last two places in the top 10 list. Tito Rabat of Avintia Ducati finished 11th, followed by KTM's Mika Kallio in 12th place.

Completing his career's final race, Honda's Jorge Lorenzo ended his MotoGP run in 13th place, his best result since the Italian Grand Prix in June this year. The final finishers were Karel Abraham of Avintia Ducati and Tech3's Hafizh Syahrin. 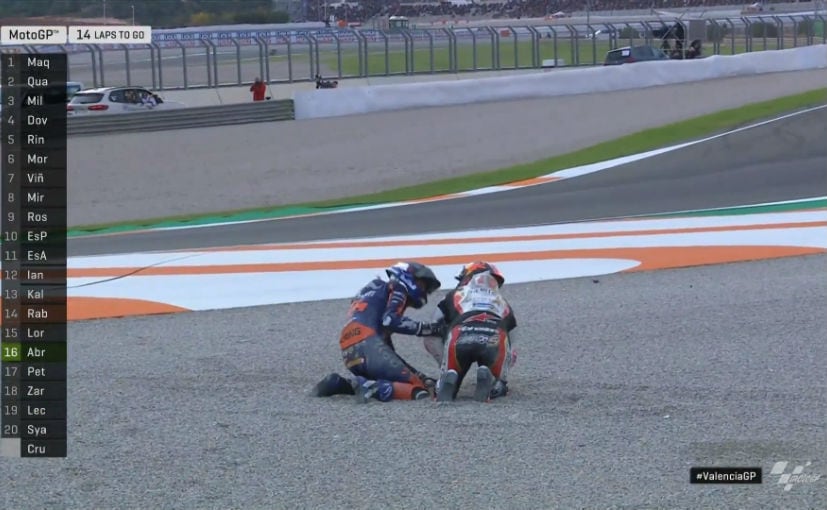 The Valencia GP finale saw a number of crashes with LCR Honda's Cal Crutchlow and Johann Zarco crashing. Zarco and Tech3 rookie Iker Lecuona crashed on Lap 14 in separate incidents along with Petrucci. Other riders to crash were Franco Morbidelli of Petronas Yamaha and Andrea Iannone of Aprilia. Thankfully, all riders have been cleared by the paramedics despite the nasty crashes.

The 2019 MotoGP season has been as exciting as ever and continued to be unpredictable. It will be a long wait for the 2020 season to arrive, but testing begins on November 19-20, 2019.