Honda rider Marquez dominated the French Grand Prix at Le Mans despite some close encounters but it was Andrea Dovizioso of Ducati who fought his way to the top, almost, in a fight with other Ducati riders. 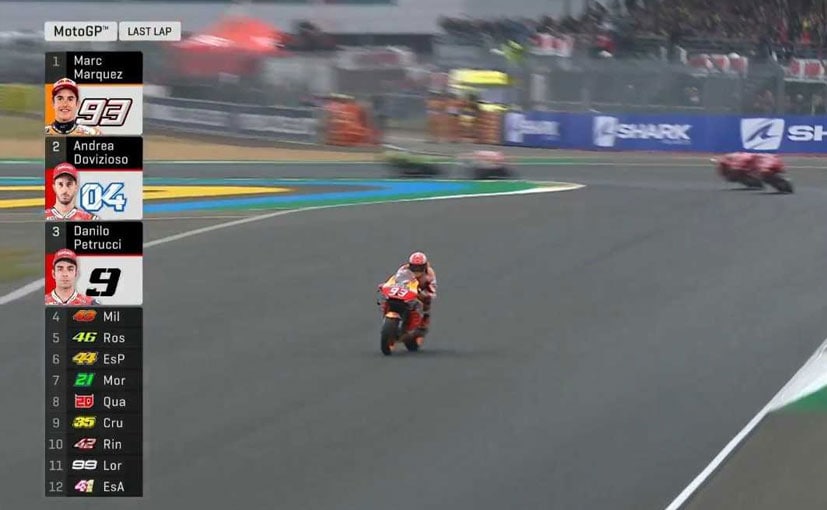 Reigning world champion Marc Marquez of Honda secured another win this season after a dominant run in the 2019 MotoGP French Grand Prix at Le Mans. The Japanese factory team secured its 300th premier class win, 53 years after taking Jim Redman took its first-ever at Hockenheim. While Marquez made a strong run right from the opening lap, it was Ducati rider Andrea Dovizioso who showed immense grit through the race to finish at P2, despite some close competition with teammate Danilo Petrucci in the final stages. Dovizioso fended off Petrucci by 0.158s to take second, while Pramac Ducati's Jack Miller and Yamaha rider Valentino Rossi rounded up the top five.

The 2019 French GP opened with Marquez on the pole with Petrucci second and Miller third, while Dovizioso started from P4. Petrucci had the better start but it was Marquez who had the better line on the first turn and took the race lead. Meanwhile, Franco Morbidelli if Petronas Yamaha and Pol Espargaro of KTM had moved up the order while Dovizioso was pushed down to seventh ahead of Honda's Jorge Lorenzo. Petrucci tried passing Marquez once again on  the opening lap but failed at it and was soon pushed down to fifth fading away after the initial run. The move allowed Miller to shine who was now hot on the Honda's tail.

The Pramac rider finally found an opportunity to pass Marquez on Lap 5 pushing the latter to P2. The Honda rider was looking to re-take what was lost and opportunity and Marquez finally found the gap two laps later as Miller ran wide allowing the seven time world champion back in the first place. It was no looking back for Marquez from hereon who started to build the gap by over a second on Miller.

By the halfway point, Dovizioso was climbing his way back to the top and was placed third behind Miller. The factory Ducati rider passed his teammate soon after and was now battling to retain P2 with Miller and teammate Petrucci breathing down his neck. Marquez was a good 3 seconds off by now, almost impossible for the Ducati riders to catch at this pace. With five laps remaining, Petrucci managed to pass Dovi to take P2 but couldn't hold on for long and ride wide on the Dunlop chicane handing the position back to the rider.

It remained a close encounter for the Ducatis at the chequered flag, while Marquez was 1.984s clear of Dovi in his third victory of the season. Finishing behind Miller and Rossi were  Espargaro and Morbidelli, while Yamaha teammate Fabio Quartararo took P8. LCR Honda's Cal Crutchlow finished ninth while Argentina GP winner Alex Rins of Suzuki took P10.

Lorenzo finished 11th after running in top 10 for most of the race, and was followed by Aprilia's Aleix Espargaro and KTM rider Johann Zarco. Tech3 KTM rider Hafizh Syahrin finished 14th followed by teammate Miguel Oliveira. Suzuki's Joan Mir was the last of the racers to complete in 16th place after falling on the warm up lap.

The French GP saw a number of retirements including Yamaha's Maverick Vinales being taken out by Pecco Bagnaia on Lap 7 while running 14th. Avintia Ducati rider Karel Abraham was another casualty of the day dropping on the warm lap along with Mir. While both racers continued, Abraham was black flagged from the race. It was a DNF for Avintia teammate Tito Rabat as well, along with Aprilia's Andrea Iannone and LCR Honda rider Takaaki Nakagami.