We finally get our hands on the much awaited, highly anticipated, Benelli TRK 502 and its off-road version, the Benelli TRK 502 X. These motorcycles have been a long time coming and they hold a lot of promise! 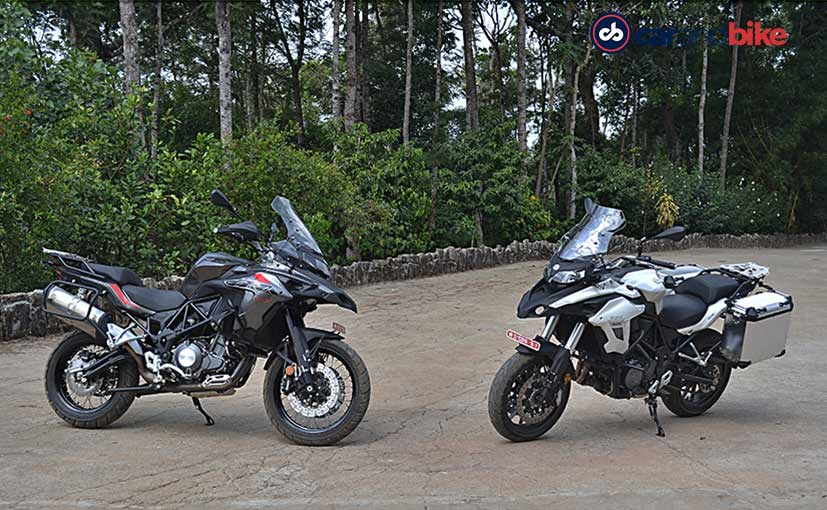 View Photos
Prices for the Benelli 502 start at Rs. 5 lakh in India.

The Benelli TRK 502 was first showcased in India at the 2016 Auto Expo. It was exciting because it was a legit adventure motorcycle with a displacement of less than 500 cc. But with Benelli having a hard time in India, the plans of it launching had to be shelved temporarily. That is until now! Starting its second innings in India with a new partner, Adishwar Auto Ride, Benelli's newest launch was the TRK 502 and the TRK 502 X. And now, we finally had a chance to ride them. Our brief ride led us to believe that these motorcycles hold a lot of promise. Intrigued? Read our story to find out. 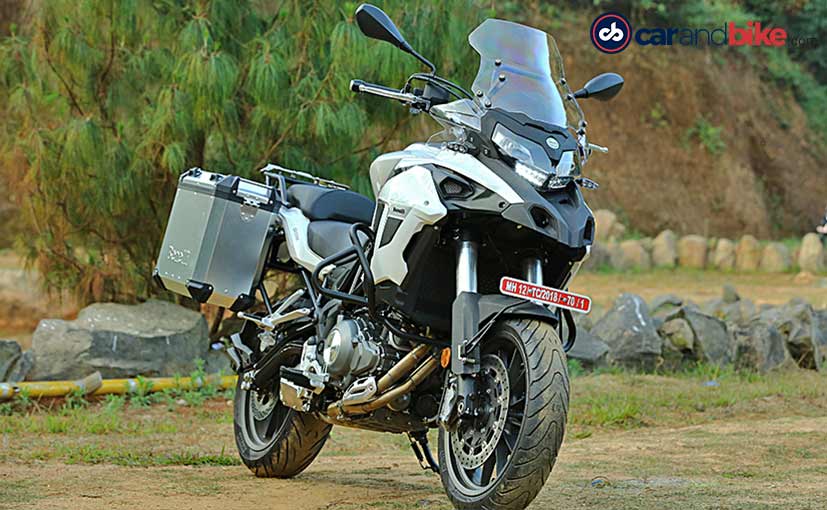 The Benelli TRK 502 can stand with bigger ADVs with its looks which is dominated by a protruding beak upfront along with the transformers like headlamps with LED DRLs.

The Benelli TRK 502 looks really good! The front end gets angular, 'transformers' like headlamps with LED daytime running lamps and a typical ADV beak protruding out, giving it a muscular stance! Then, you have the fat 50 mm upside down forks at the front which add even more muscle to the motorcycle. From the side, the tank extensions and the sculpted fuel tank itself take prominence. You also get a crash bar, an exposed trellis frame and mounts for panniers along with an upswept, side-mounted exhaust. At the rear is a bolt-on carrier to mount either a top box or luggage, completing the overall beefy, brutish ADV look. Ride it on the road and you are bound to get second glances all over. And yes, the look does resemble that of a certain Italian ADV too. Imitation is the best form of flattery, we guess! 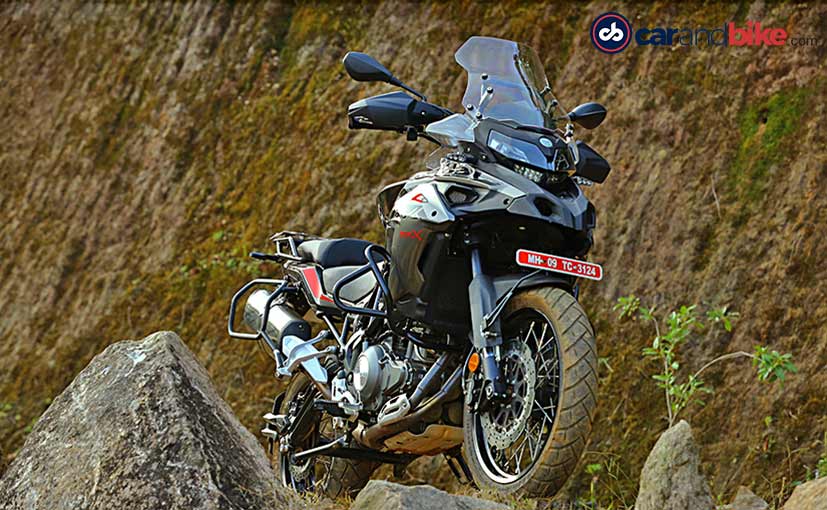 The Benelli TRK 502 X is a more off-road focused motorcycle and gets bigger wheels upfront with wire-spokes, higher ground clearance and an upswept exhaust.

Simply put, the TRK 502 is the road-biased variant while the TRK 502 X is the off-road variant. There are quite a few differences between the two. The TRK gets alloy wheels, both 17-inch units while the X gets wire-spoke wheels, a 19-inch unit up front and a 17-inch unit at the rear. Also, the TRK 502 wears Pirelli Angel GT rubber while the 502 X is shod with Metzeler Tourance dual-purpose tyres. The 502 gets regular 320 mm discs with fixed callipers while the 502 X gets petal discs which dissipate heat better and the floating callipers work better while off-roading. Also, the 502 X gets handguards and a tiny metal bashplate as standard, while on the 502 you might have to get them installed as optional equipment. We say might because Benelli is still working on the final list of accessories for both motorcycles. The ground clearance on the 502 is 190 mm while the ground clearance on the 502 X is 220 mm. Also, the seat height on the 502 is 800 mm while on the 502 X, it is 40 mm more. Lastly, both motorcycles get different graphics and the 502 X gets a side-mounted upswept exhaust while the 502 gets a low-slung exhaust. And yes! That's about it! 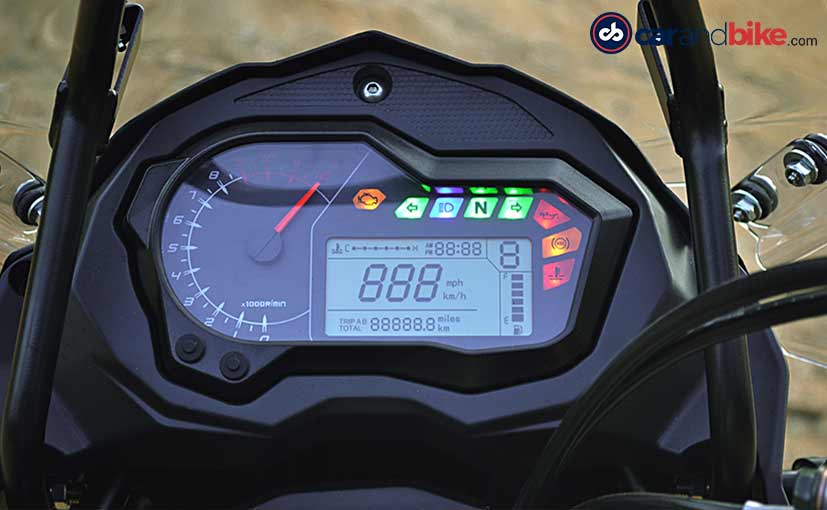 The TRK 502 doesn't have a long list of features like other, more expensive ADVs do. It does get a part digital, part analogue instrument console. The analogue part is the rev counter while the digital display shows speed, fuel, trip meters, odometer, and gear indicator along with engine temperature. The bikes also get ABS as standard that can be switched off completely. That is all these motorcycles get in terms of electronics. Benelli also offers a conveniently placed USB charger as standard, which is placed on the left side of the fuel tank, right below the switchgear. The footpegs are serrated and the rubber can be removed if need be, offering better grip when riding off-road. What we did miss though, is the adjustment for the windscreen. 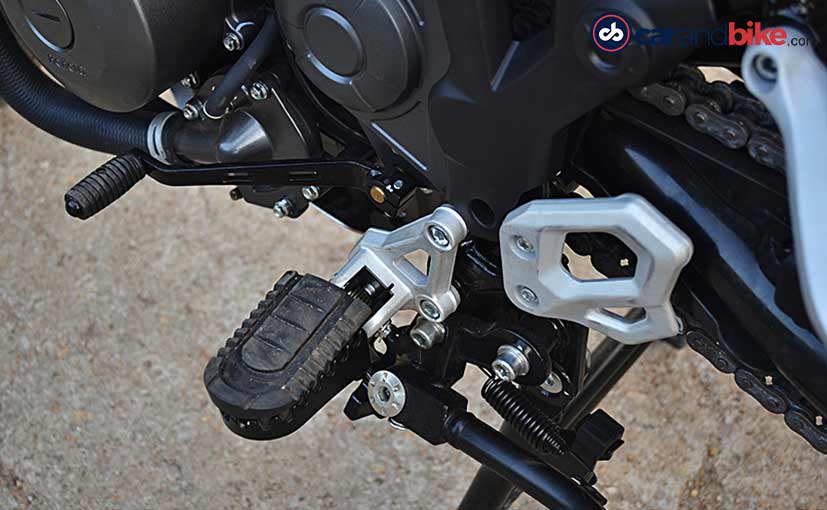 The footpegs are serrated and the rubber can be removed to get a better grip when you want to stand up and ride.

Both models, the 502 and the 502 X, have a comfortable perch, offering a good view of the terrain up front. The footpegs are set a tad too forward in our opinion. They could have been slightly rearset. The upright seating position is comfortable and the handlebar is at an optimum distance from where you sit. Should you want to stand up and ride, taller riders might feel a little uncomfortable as they may feel that the handlebar is a tad too low. But for me, it felt perfect. The step-seats are comfortable and there is enough room for the rider to wiggle and shift weight on the move while off-roading. 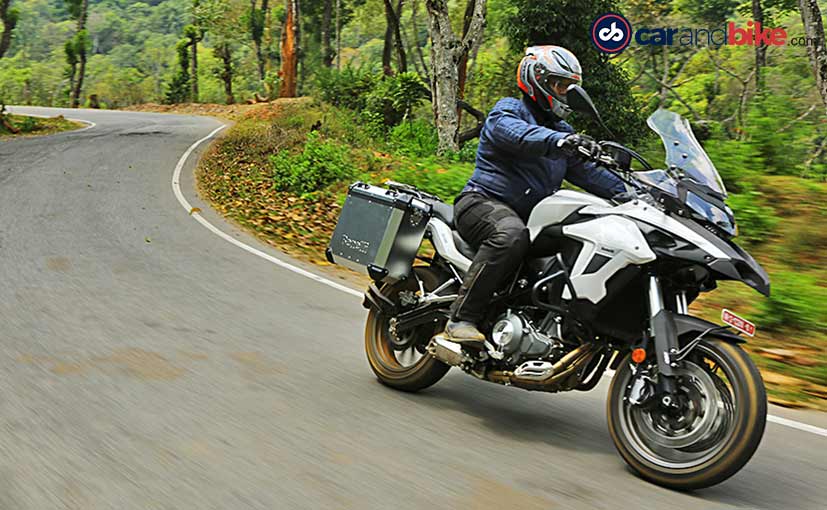 The engine of the Benelli TRK 502 is refined and there is no hint of vibrations while revving hard.

The Benelli TRK 502 is powered by a 499.6 cc parallel-twin engine which is liquid-cooled and pumps out 47 bhp at 8,500 rpm and churns out maximum torque of 46 Nm at 6,000 rpm while being paired to a 6-speed gearbox. The engine is quite refined and there is no hint of vibrations even while revving hard. The motor is torquey and there is enough grunt to pull the bike from 50 kmph in 5th gear to over 110 kmph. The sixth gear is meant for cruising and should you want to perform quick overtaking manoeuvres, you will have shift down. The first gear on the 502 is a bit too long and more experienced riders might find this to be less engaging. Although, it makes the bike more user-friendly for less-experienced riders! The motorcycle has more than enough juice to keep it going at triple-digit speeds all day long. And what sweetens it all is the exhaust note! It is deep and laden with bass and when you wring the throttle, the motorcycle does get loud. 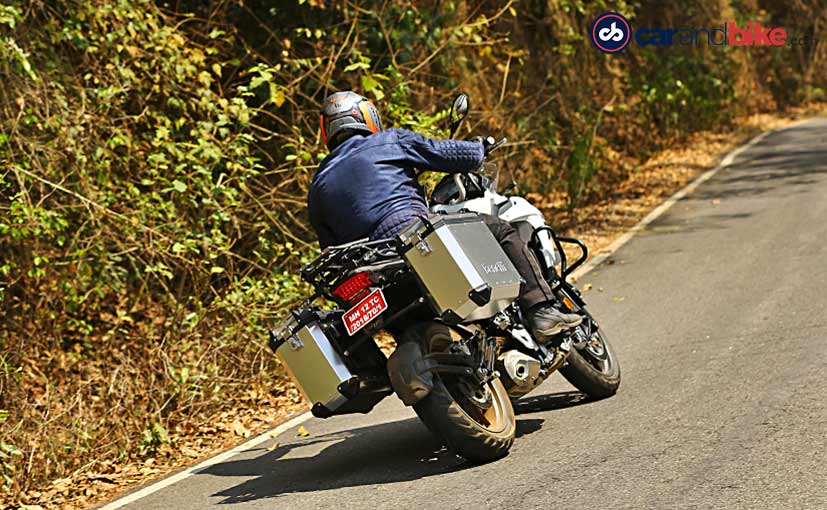 The rear suspension of the Benelli TRK 502 gets adjustment for rebound and preload.

The factory setting for the suspension is quite supple on both, the 502 and the 502 X. It glides over potholes, bumps with ease and is more than happy to go airborne occasionally as well. There is no adjustment for the front USDs while the rear suspension does get adjustment for rebound and preload. The motorcycle does well to take on twisties but quick direction changes are not its forte! At 235 kg (kerb weight) the motorcycle is portly and it is something which does negate the handling abilities of the motorcycle. The Pirellis on the 502 and the Metzelers on the 502 X offer good grip on tarmac as well as dirt, respectively! 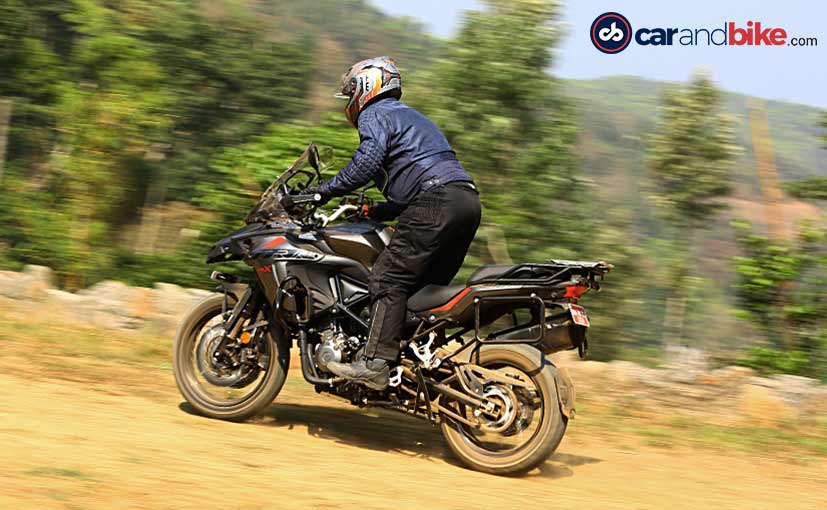 A lighter Benelli TRK 502 X would have manoeuvered easily off the road.

We took the Benelli TRK 502 X on some mild trails in and around coffee plantations in Chikmagalur and while it did well in the dirt, it definitely isn't as capable as maybe a Suzuki V-Strom 650 or a SWM SuperDual, which will be its primary rivals. The motorcycle is not uncomfortable over the rough, but one needs to really work it in order to have some fun or tackle nasty terrain. Lesser weight would have gone a long way in improving the manoeuvring of the motorcycle. Nonetheless, as far as touring abilities go, be it the TRK 502 or the TRK 502 X, one can easily do upwards of 600-700 km in day. And with a 20-litre fuel tank, you can cover quite some distance between tankfuls. 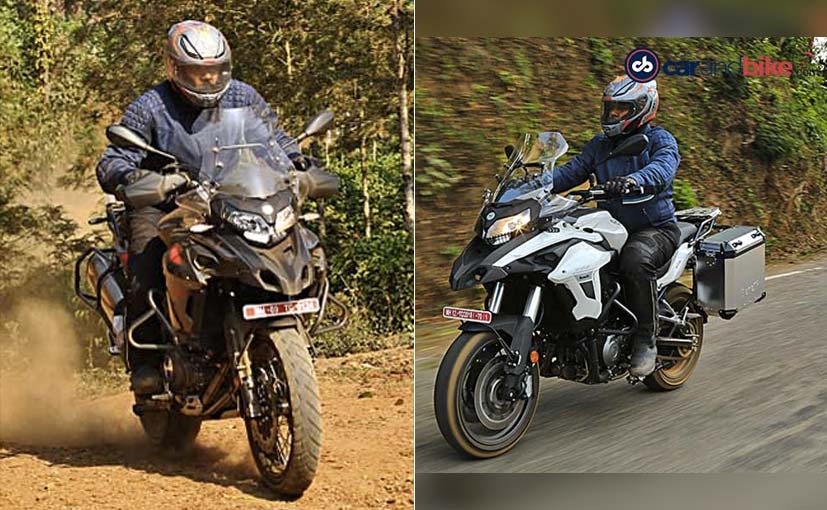 The Benelli TRK 502 and 502 X are attractive buys at their price points.
0 Comments

At a price point of ₹ 5 lakh for the Benelli TRK 502 and ₹ 5.4 lakh for the Benelli TRK 502 X, the motorcycle is well-worth the price. The performance, while not exhilarating, is very good and there is no doubting the touring ability of these motorcycles. Also, there is decent amount of kit and switchable ABS on offer as well. More than anything else, it is the road presence which will catch the eye of a potential buyer. The TRK 502 can stand with bigger ADVs in India and yet hold its ground. Plus, at that price point, it doesn't quite have a rival unless you go a couple lakhs higher and look at the likes of the Kawasaki Versys 650, Suzuki V-Strom 650 and the SWM SuperDual. Yes, it has its share of flaws (we would have liked more power OR less weight) but pricing is sweet and it has the potential to do well for Benelli in India.