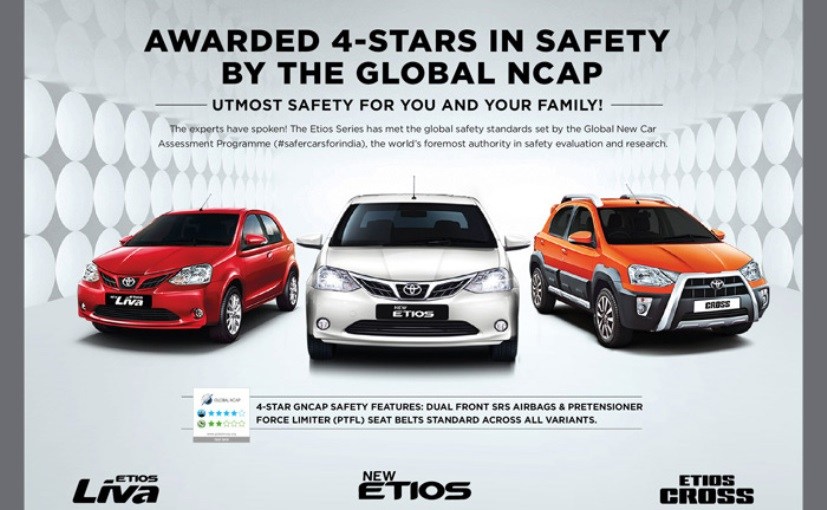 With India boasting of one of the world's most dangerous network of roadways, safety has become an increasingly important concern. Reports of people being killed in car accidents have become a near daily occurrence and to combat this growing problem, manufacturers have started upping the ante in terms of safety with features like ABS and airbags becoming increasingly popular.

Among the affordable car manufacturers, Toyota has been a brand that has always given the utmost importance to passenger safety and was in fact one of the first brands to offer standardised safety features across all variants. Testament to its position as one of the segment leaders in terms of passenger safety, the Toyota Etios has now been awarded 4-stars in the Global NCAP crash test. 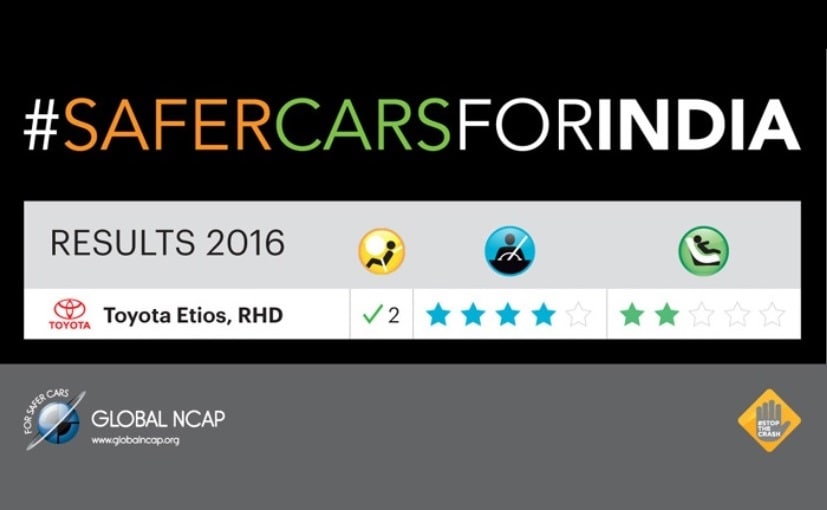 As part of its #SaferCarsForIndia campaign, Global NCAP has been independently crash testing small cars in India since 2014. The initial tests were performed on the Maruti Suzuki Alto 800, Hyundai i10, Ford Figo, Volkswagen Polo, and Tata Nano. The test results highlighted the susceptibility of occupants to life threatening injuries in case of road accidents as all 5 cars received 0 star ratings. All 5 were subjected to a frontal collision crash test at 64km/h. Later on in the year in November, 2014, the Datsun Go and Maruti Suzuki Swift were also tested and as was the case with the previous set of results, both cars received 0-star adult protection ratings.

Also Read: Airbags Might Soon Be Mandatory in India

The Volkswagen Polo was the first car to feature a change based on the Global NCAP results in 2014. The addition of dual standard airbags raised its star rating from 0 to 4 for adult protection. Datsun too committed to improving the safety performance of the Go with a strengthened body shell and optional airbags. Late last year, Toyota added 2 airbags and 2 pretensioners as standard safety features on all its Etios variants and then asked Global NCAP to test the car and provide them with a star rating for the hatchback's crashworthiness.

The results of the test showed the Toyota Etios to offer a good level of protection for its front passengers. The car achieved a 4-star rating for frontal adult passengers and 2-stars for child occupant protection.

Speaking with regards to Toyota's achievement, David Ward, Secretary General of Global NCAP, said, "Global NCAP congratulates Toyota on this voluntary initiative which has resulted in significant safety improvements for the Etios model sold in India. Global NCAP encourages all car manufacturers to follow the safety example set by Toyota and VW to improve occupant protection for all their models sold in India. It is impressive to see a major manufacturer achieve a four star result and we look forward to the first five star car in India."