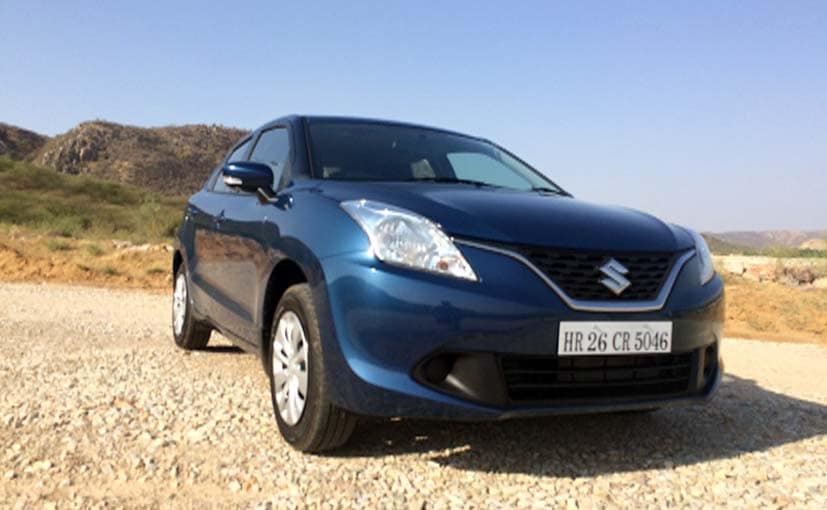 First may I just state for the record that the car is called Baleno - not Baleeno or Baaleno! The name comes from the Italian word that means flash (of light), and is a nameplate we know well from the previous car from the Suzuki stable that carried it. That was a sedan, and one that did just about okay for Maruti Suzuki.

But the new Maruti Suzuki Baleno is nothing like that car, and Maruti would want it to sell in much high volume! With the Hyundai i20 totally owning the premium hatchback space, and with the segment itself now accounting for almost 20,000 units a month, Maruti would be right to want a big piece of the action. I have it on good authority that it is looking to make (and sell!) at least 8000 Balenos a month.

So what's the Maruti Suzuki Baleno all about? I had my first preview that we also presented to you, at the 2015 Frankfurt Motor Show. The cars that made their global debut were also built by Maruti Suzuki right here in India, and it was evident that this would be the lead market for it.

The Maruti Suzuki Baleno will be made primarily in India, and eventually Suzuki sees it selling in 100 markets. The car will sport Suzuki's more modern engines in Europe, but in India we will get the Baleno is the two familiar powertrain avatars we know well - the 1.2 VVT petrol (84 bhp, 115 Nm, 21.4 kmpl) and the 1.3 DDiS diesel (74 bhp, 190 Nm, 27.39 kmpl). The two variants will be mated to the 5 speed manual gearbox, but the petrol is also on offer with a CVT - Maruti's first.

I have spent a fair amount of time driving the CVT today, and I can tell you two things straight off. First, I am desperate to also now drive the diesel, and I shall tomorrow morning! And second that there is definitely a different approach I see from Maruti - one we should have seen a while ago - but better late than never!

The Maruti Suzuki Baleno aims to be progressive, modern, sporty and practical. I do have to say that while Suzuki aimed for style too, the car lacks oomph. And that is something the segment demands. You can either have the clean and classical lines of a Polo, the Italian flair of a Punto or the stylish and modern character of an i20 or Jazz.

The Maruti Suzuki Baleno is certainly behind on looks. But what the car's styling does imply is ample size - a big plus in this space. The higher variants do get projector headlamps with LED daytime running lights, which help make the car look modern, but the variants without all that are looking like a bigger Swift at some angles. Suzuki is calling this its Liquid Flow design language, and I expect future products like the compact SUV to carry some of these cues.

The Maruti Suzuki Baleno's lower window-line and large glasshouse is very welcome in this era of rising belt-lines and disappearing rear quarter-glass! This also adds to the spacious feel of the cabin.

Inside Maruti has been bold to go with an all-black trim. Yes that's bold in the era of beige or two-tone interiors. The good news is that plastics seem good, and finish is also much better than what you'd expect from Maruti. Despite the dark colour treatment, the Maruti Suzuki Baleno's cabin implies massive space. Legroom, headroom, knee room, shoulder room, or just plain elbow room - its ample and I like that.

The seats also comfortable though a driver seat height adjuster would have been very welcome (I've been told the higher variants have that, I was driving the CVT which only comes in the Delta trim). The Baleno will be offered in 4 trims: Sigma, Delta, Zeta and Alpha - on both diesel and petrol. Like I said the CVT will only get the one variant, which is a pity as buyers may like some of the bells, whistles and LEDs! No DRLs, no reverse camera, no touchscreen infotainment (with Apple CarPlay), and no navigation - which are all on the Alpha trim.

But you do get climate control, steering mounted controls and most importantly - nearly all the safety features. In fact dual airbags, ABS, EBD and front seatbelts with pre-tensioners are standard even on the base Sigma trim. Kudos Maruti Suzuki for finally doing what I remember saying it should've done with the Ciaz. Excellent move!

The Maruti Suzuki Baleno will be sold in 7 colours - Orange, White, Grey, Red, Silver and very surprisingly - two blue shades. It will be sold only through Maruti's premium Nexa brand network, alongside the S-Cross. Expect the compact SUV to be the next Nexa product by the way. Maruti has opened the bookings of the Baleno today! It will launch the car on the 26th of October. Expect prices to be aggressive, Nexa notwithstanding!

So I know what you're thinking - how does the car drive? Well I have only driven the petrol automatic, and would like to spend a bit of road time with the diesel and also the manual petrol before I tell you what I think. But I will tell you this, the car impresses with it's balance, suspension, handling and steering.

The petrol engine is excitable, but lacks punch when mated to the CVT. Having said that the CVT is excellent for city traffic, and is allows the engine to be plenty responsive at lower revs and speeds. But I have loads more to go through on the car's road manners, but like I said, I want to acquaint myself with the other variants first! So watch this space for my very detailed review of the new Maruti Suzuki Baleno!