The 2021 Mercedes-Benz C-Class looks quite like the baby S-Class and is a whole lot different from the outgoing model. The makeover surely is adding a sense of freshness in its appearance, being very much familiar with the family design language. 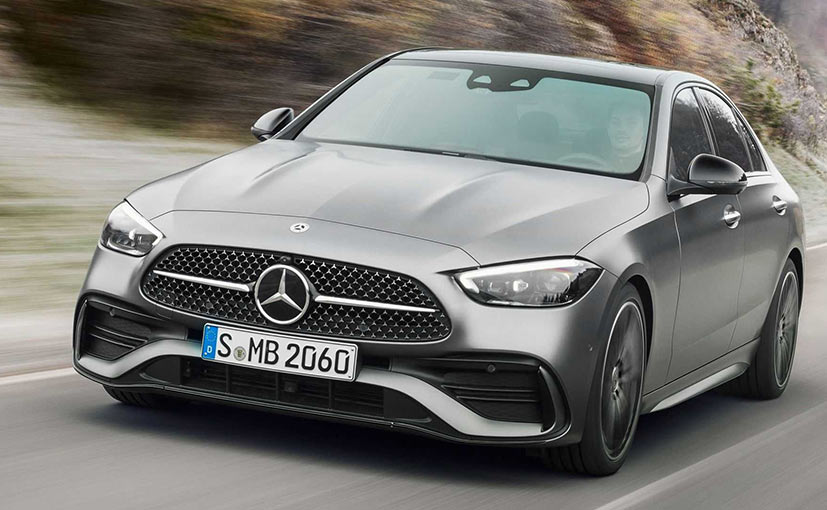 The all-new Mercedes-Benz C-Class has finally made its global debut and just as we were expecting, it looks very similar to the German carmaker's flagship sedan in the range. The design of this W206 C-Class is heavily inspired from the new S-Class, not only on the outside, but on the inside as well. The silhouette itself is reminiscent of the 2020 S-Class. Obviously it's compact compared to the flagship but the same outline is apparent and it is a significant departure from its predecessor. Yes! The 2021 Mercedes-Benz C-Class is the sixth-generation model and is significantly different from the outgoing model. The new design definitely adds a sense of freshness in its appearance, thanks to the new family design language. 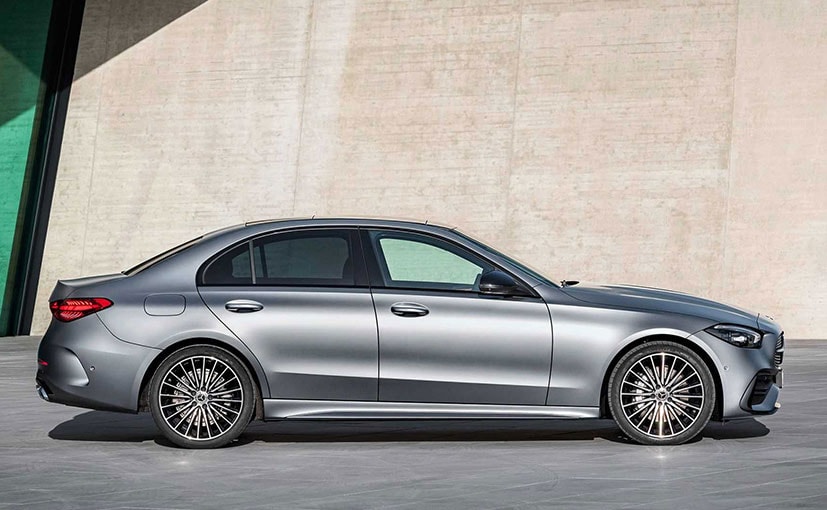 The new Mercedes-Benz C-Class gets a slightly tapering roofline.

The face on the new model looks a bit sharper sporting a slightly protruding nose while it also gets a new and bigger radiator grille. Then there are sleeker headlights while at the rear there are horizontal taillights, similar to those we saw in some of the newer models from the carmaker's stable. The US-spec model will be available with a choice of 18-inch or 19-inch wheels whereas in Europe there is also a smaller 17-inch set and we expect the same model to come to our shores. At the rear, the sixth-generation model is the first C-Class to have two-piece taillights, quite like its bigger siblings - the E-Class and S-Class. 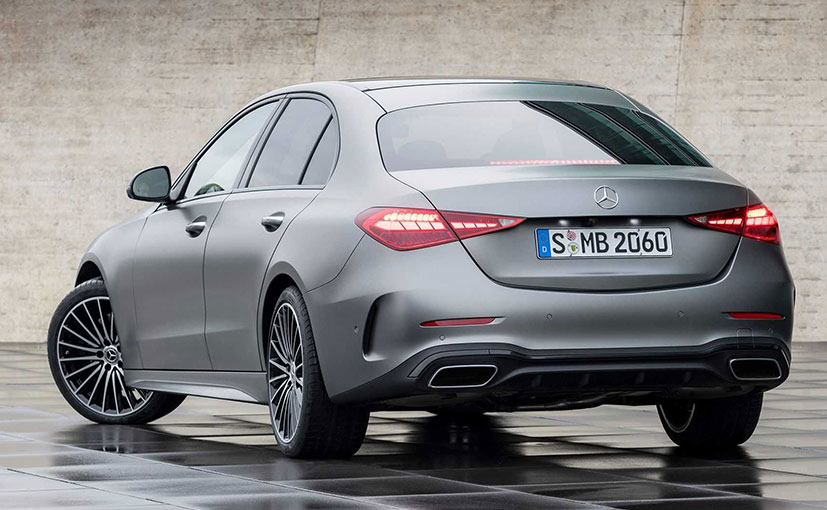 For the first time the Mercedes-Benz C-Class gets split taillights like its bigger siblings.

Just like the design, even on the inside the new Mercedes-Benz C-Class has taken inspiration from the S-Class and there have been some significant changes starting with a new dashboard. It sports a neatly integrated tablet like touchscreen unit, which is raked at a certain angle. It also gets a 12.3-inch digital instrument cluster along with a 11.9-inch touchscreen for the second-generation MBUX infotainment system. Lower trims in some of the markets will get a smaller 10.25-inch driver's display and an even more compact 9.5-inch centre screen. Then, it's a bit more spacious on the inside with a 25 mm longer wheelbase measuring at 2865 mm. Speaking of dimensions, it is 65 mm longer and 10 mm wider compared to the outgoing model and looks sportier, courtesy the sharp design and a slightly tapering roofline. Moreover, its boot space remains unchanged at 455 litres. Then it also gets the Digital Light system. The optional headlight setup gives guidelines and warning symbols onto the road along with offering a superior dazzle-free illumination by splitting the light via a whopping 1.3 million micro-mirrors.

Also Read: Mercedes-AMG A 35 Sedan To Be Made In India 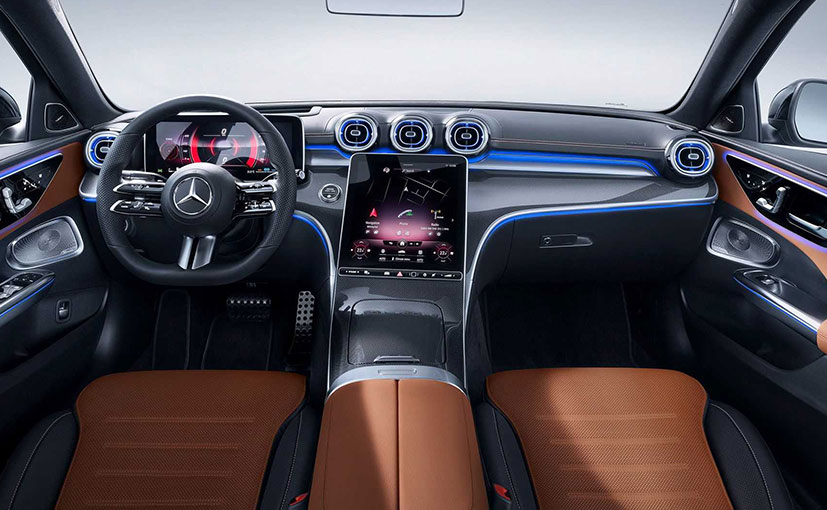 The interior of the 2021 Mercedes-Benz C-Class too is inspired from the new S-Class.

And finally coming to its engines and variants, there is a long list of trim levels which of course will vary in different markets. First up is the C300 which gets a 2.0-litre, four-cylinder, turbocharged motor 252 bhp and 400 Nm of peak torque and is coupled with an integrated starter-generator that adds a temporary boost of 19 bhp and 200 Nm. This iteration comes in both rear wheel drive (RWD) and the 4Matic all-wheel drive (AWD) setup and both trims can clock triple digit speeds in just 5.9 seconds, further ticking a top-speed of 209 kmph. 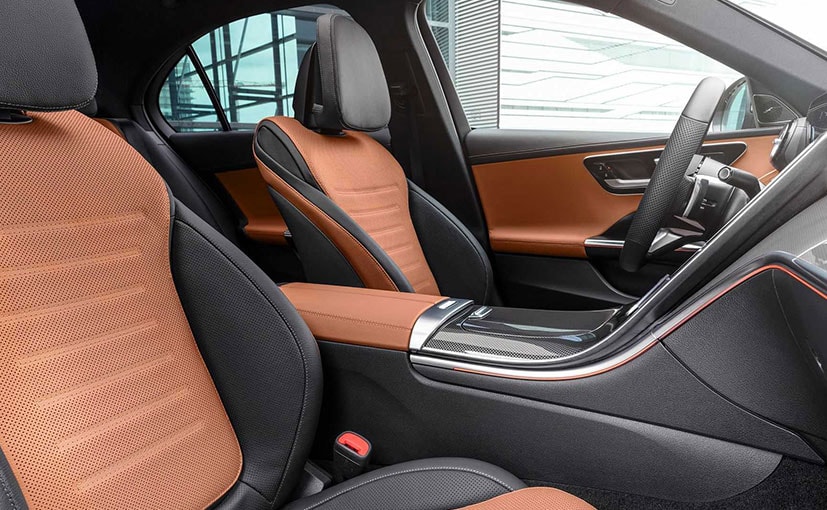 The new Mercedes-Benz C-Class is more spacious on the inside, compared to its predecessor. 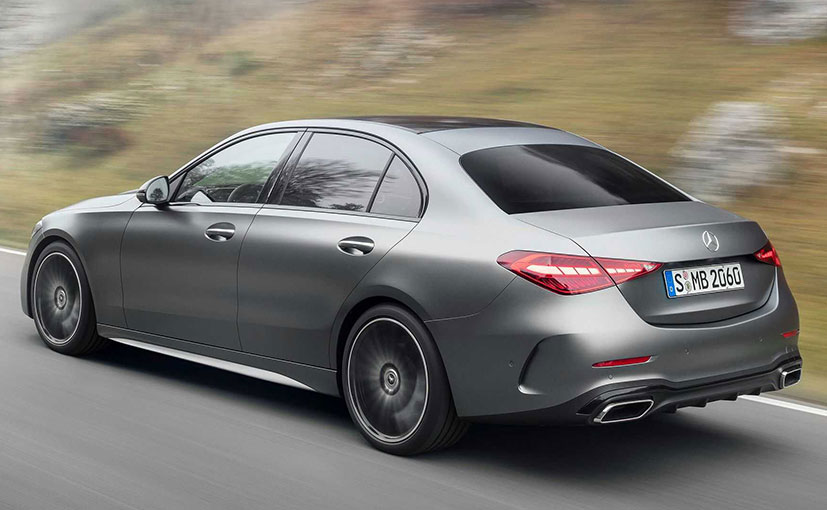 The wheelbase of the new Mercedes-Benz C-Class has increased by 25 mm. 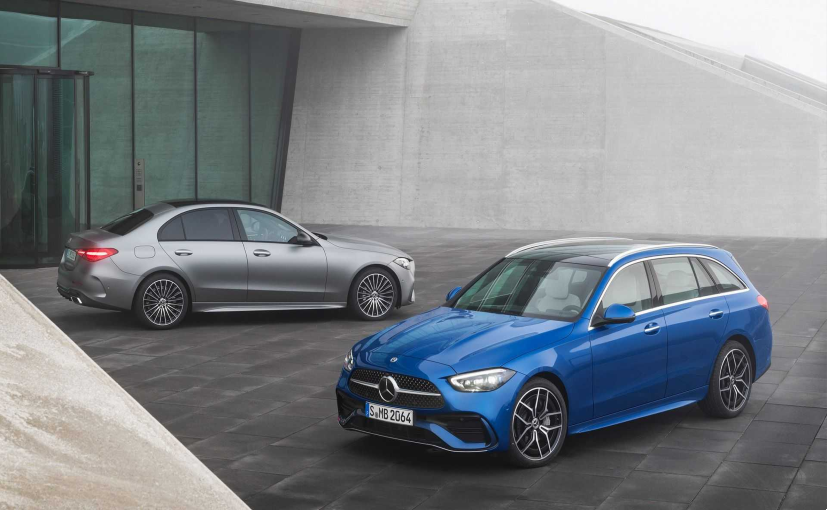 The new Mercedes-Benz C-Class is also offered with the Wagon body style which is unlikely to come to India.

And finally, there is also the C300e which is a plug-in-hybrid (PHEV) exclusive for the European market. The 2.0-litre, four-cylinder, petrol engine is complemented by an electric motor and in combination this powertrain puts out 304 bhp and 550 Nm of peak torque. The PHEV variant is equipped with a 25.4-kWh battery pack that can give an electric range of 100 km as per WLTP cycle.

One of the biggest upgrades in the new C-Class is the rear-wheel steering which has helped improving its turning circle radius (TCR) by 0.43 metre at 10.64 metres. The steering angle at the rear axle is 2.5 degrees or four times smaller than the more sophisticated setup installed in the S-Class. At speeds below 60 kmph the rear wheels steer in the opposite direction to the front wheels and in the same direction at higher speeds.