Tata Motors' H7X-based 7-seater SUV, was recently spotted testing India. Globally revealed at the Tata Buzzard, in this new images we also get a small sneak-peek at the SUVs cabin. View Photos
The Tata H7X or Tata Buzzard is the 7-seater version of the Harrier, and will be lauched in 2020

A prototype model of Tata Motors' HX7 based SUV, the 7-seater version of the Harrier, was recently spotted testing in India, and this time around we even get a small sneak-peek at the SUVs cabin as well. While the carmaker has already revealed the SUV at the Geneva Motor Show, with the nameplate of Tata Buzzard that name is reserved for the global market, and the India-spec model is likely to get a different name, and will be launched in 2020. Having said that, the SUV will retain most of the Buzzard's design and styling, which themselves are derived from the Tata Harrier. Same is the case with the cabin too, which largely resembles the interior of its existing 5-seater cousin. 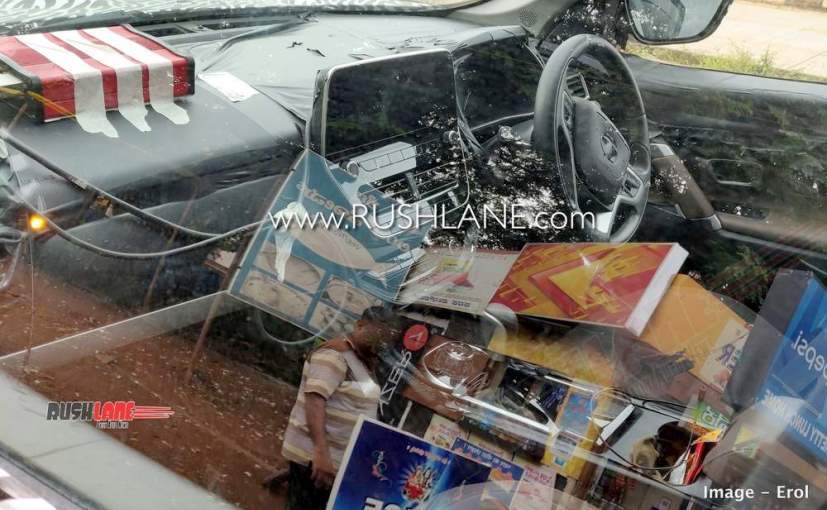 While the image is not exactly the clearest one out there, however, we do get to see the prominent stick-out display in piano black housing with in-car controls and chrome bezel. We also see the same three-spoke steering wheel, and similar black and brown dual-tone interior theme as well. A closer look at the centre console also reveals that this is an automatic model, which is interesting considering the Harrier still only come in manual option.

The Tata H7X comes with extended overhangs, indicating the SUV's longer footprint, which is 63 mm longer compared to the Harrier and 80 mm taller, to accommodate the third row and offer better leg and headroom. The prototype model see in the spy photos is running on the same 5-spoke silver alloy wheels as the Harrier, however, we expect the 7-seater version to come with a new set of wheels as well.

Under the hood, the upcoming Tata H7X is likely to be powered the same Fiat-sourced 2.0-litre, 4-cylinder diesel engine that powers the Harrier. In the latter, the oil burner is tuned to churn out 170 bhp and 350 Nm peak torque, which will come mated to a 6-speed manual gearbox, and an automatic transmission as well, which is also likely to be featured in the Harrier soon.