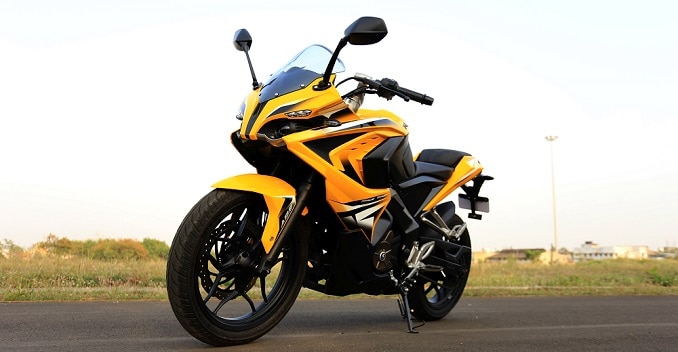 Before I start off with my impression of the Bajaj Pulsar RS200 after the brief ride I had on it at Bajaj's test track in Chakan, I must accept that I suffer from a little paranoia and reluctance when it comes to the Pulsar name. I've had a love-hate relationship with the Bajaj Pulsar. I've ridden all the Pulsars to come out till now, and have had some really good moments with them. I also suffered a very severe accident a decade-and-a-half ago while riding the original Pulsar 180 that almost cost me my life. That's stuck with me ever since. 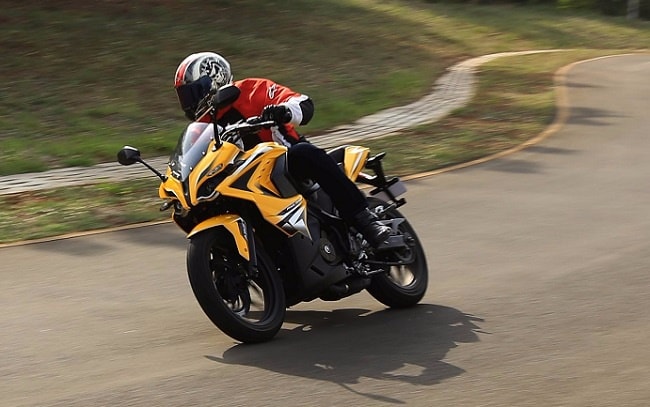 Anyway, before I hit the track on the RS200, I was given a crisp download of the product. The bike has undergone some major, and some not-so-major revisions compared to the Pulsar 200NS - the product which the RS200 is chiefly based on. However, all that chatter needs to translate into actual performance advantage - with the RS200, it does.

The engine construction broadly remains the same, but the RS200 gets a new head and, more importantly, fuel injection, as against carbureted fuel supply in the 200NS. Power rating has gone up by one horsepower, and the RS200 flaunts 24bhp that peaks out at 9,750rpm. The throttle response is definitely crisper and more instant on this bike, and that's sort of needed as well - to offset the bulk of about 15-20 kilograms that's gained in form of the fully faired plastic body work and other technical components like the ABS unit, etc.

I've not been a great fan of the 200NS - its seating was a bit weird and I wasn't ever comfortable with the handlebar-seat-pegs geometry. The RS200 gets a shortened rake - so the handlebars are closer to the rider and the entire seating position is biased more towards comfort; it's more upright than outright sporty. For a bike that's positioned as a sports product, that kind of works - which is very strange! I guess the design was never meant to offer aggressive riding posture to begin with. The seat itself has good padding - that's a great thing. 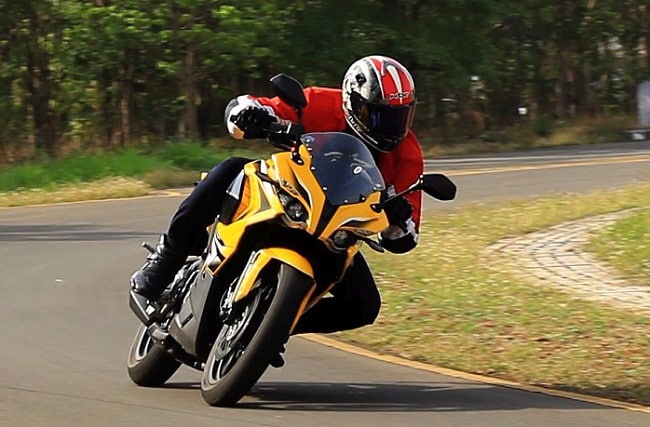 I was riding around Bajaj's official test track, and around the corners the RS200 felt a bit less entertaining than what I thought it would be - especially because the suggestions from its engine were very encouraging. That leaves you with mixed feelings. Though the chassis balance is quite good, the default suspension setup is rather soft and my heart stopped for a second on one hairy moment I had while leaning into a fast right-hander. I'm sure the ride is going to be quite worthy on regular city roads going at regular city speeds, but if you'd like to enjoy some track riding or want to go knee-kissing around some snaky ghat roads, I'd say you tune the monoshock a bit in favour of handling.

Engine note - again, at lower revs, it doesn't sound all that great, but at full chat the RS sounds genuinely good. And speaking of full chat, at one point, I saw 148-149Km/h on the speedo - keeping a margin of error in mind, that would translate to a realistic speed of just over 140Km/h. That's plenty fast, but the vibrations still tend to creep in to bodily areas that I shall refrain from mentioning. The initial gears are susceptible to vibrations so I was just short of short-shifting through the first two cogs, but from 3rd gear on, I was revving the engine to about the 9,000 mark and there was a pronounced buzzy sensation through the seat. Also, if you're riding without gloves - yes that happens a lot in real-world scenario - you might even feel a slight bit of vibration through the handlebar grips. The gearing is essentially the same as in the NS, but the sprocketing has been altered to help the RS achieve a higher top-speed. 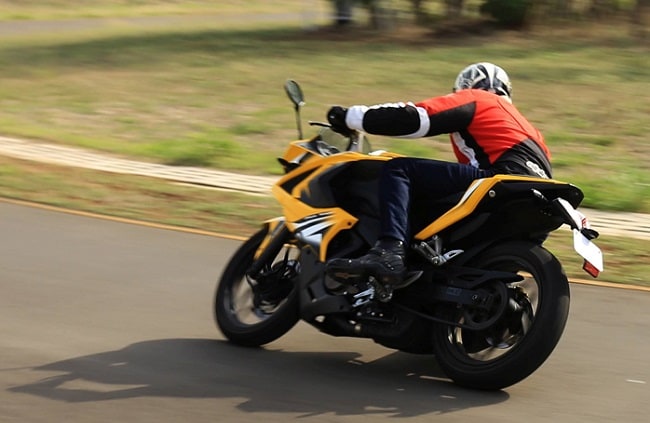 With that being said, what I really liked is how neatly and quickly the RS200 turns into corners. The steering is very responsive, and the slightly modified construction and compound of the MRFs that the RS was riding on makes a world of difference. The lean angles that the bike can manage would've been really difficult with the default suspension setting had it not been for the confidence that the tyres offer - both front and rear. The brakes now - the RS200 is offered in two trims: ABS, and non-ABS. I was on the saddle of the ABS version the whole time, so please pardon me for being unable to tell you any functional attributes of the non-ABS variant. The ABS offered is a single-channel system - that means only the front wheel gets ABS equipped braking.

While you don't quite feel the ABS working in regular riding situations, it's more prominent in emergency or panic episodes. Under hard braking, the front did keep its line and the brake bite was sufficiently effective. I'd have liked more feedback from the lever though. But it's the rear where things get a bit eerie. While going full angry on the anchors, the rear end tends slide - that's not what I expected one bit! It was really unnerving the first few times, but then it became fun and I did that a few times just for the heck of it - that's definitely not recommended. 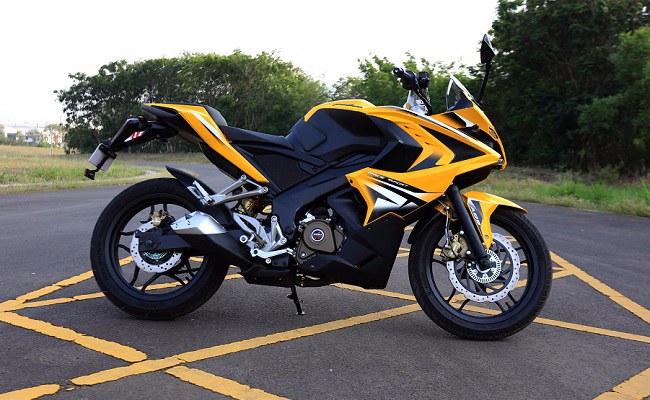 The RS200 is, as can be clearly experienced, more aggressive than the 200NS - so, expect the fuel efficiency to be lower than its non-faired sibling: mid 30s (35Km/l) or thereabouts I guess.

The RS200 is placed in a segment where it fights against the likes of Yamaha R15, Honda CBR 150R, and the KTM RC200. It does manage to look slightly bigger than all of these, but, crucially, it also looks the most controversial. There's a sense of overdone everything about the RS200. The front is dominated by a very peculiar looking body work that flows down the centre and looks like an extreme snout, and the dual-projector head-lamps remind you of the latest Yamaha R1 - and I don't like those either! 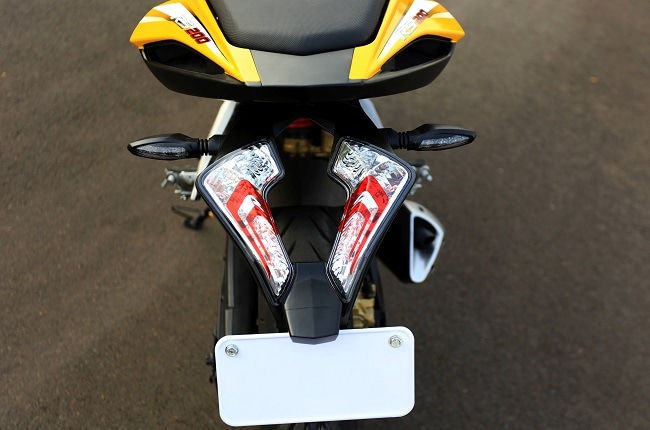 The tail-lamps, too, are just a bit too weird, and the rear section from the front seat on, leading up to the lights reminds me a bit of the Karizma and the original Xtreme by Hero. Strange, I know. The RS200 looks a bit over-the-top, a bit too try-hard, a bit silly, a bit brash, and a bit fussy. It gives a sense that Bajaj designers were deliberately thinking hard to make the RS200 stand out. It may have worked in a way though - the RS does catch the eye easily, but not in the most pleasing ways. 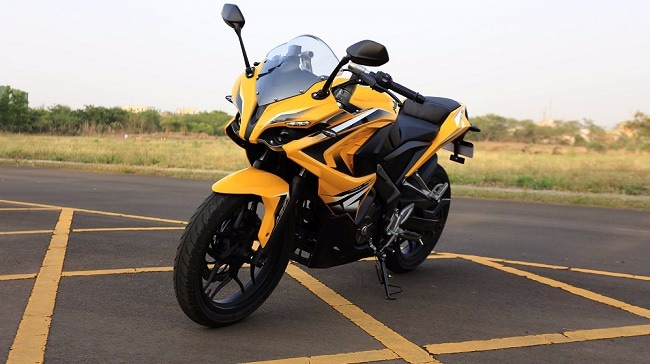 The RS200 is not as entertaining as the R15 or the RC200 - those bikes are in proper full-attack mode from the word go, whereas with the RS, you need to spend more and more time on it to get familiar with its boundaries and character. Its limits are not as great as its rivals from KTM and Yamaha, but at being a flaunt machine, the RS200 might just be good enough for some unusual college-goers. 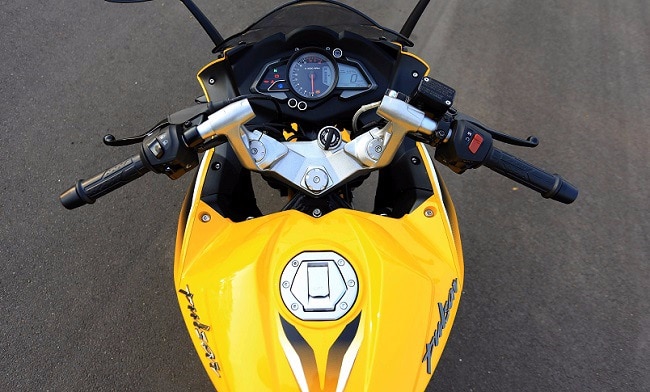