The Suzuki Swift Katana Edition is based on the Suzuki Katana Motorcycle which will make its comeback in 2020. 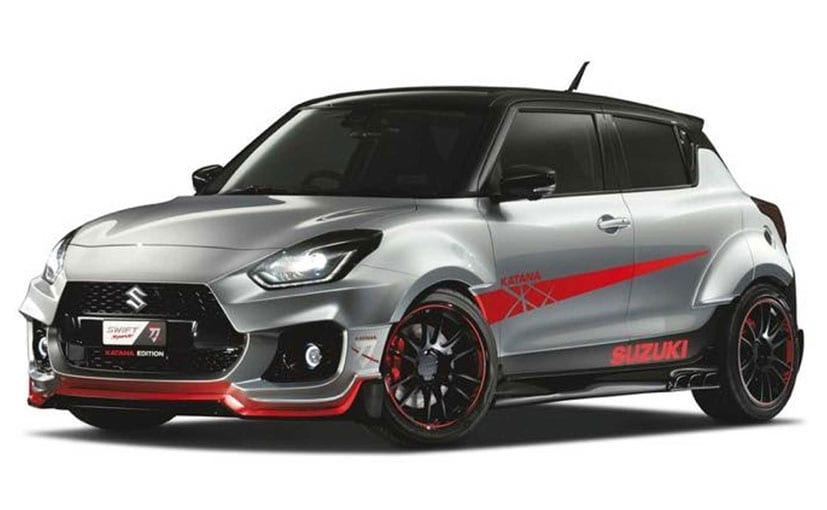 Suzuki seems to be experimenting with its models these days and the new widebody Suzuki Swift Sport which will make its way to the upcoming Tokyo Auto Salon 2020 is a perfect example. The new Suzuki Swift is christened "Katana Edition" after the renowned Katana motorcycle which will make a comeback in 2020 after a 14-year hiatus. For the uninitiated, the Suzuki Katana was one the most popular superbikes of 1990s with a very flamboyant styling for its time. The Swift Sport Katana Edition adopts its rudiments in a bid to exude a sense of sportiness.

To begin with, it has a lowered stance sitting closer to the ground and gets widebody kits in abundance, right from the facade and fenders to the haunches and all over. The bumper itself is of no regular swift and looks way chunkier with big air curtains and razor sharp detailing. The grille and fog lamp housing are finished in gloss black and there are smoked inserts even in the headlamps bezel. It's very obvious that the suspension travel has been reduced given the lowered stance and the set-up is stiffer than the regular model. The profile also pronounced side skirts and wheel arch fairing along with beefier alloy wheels finished in black with red ring line. There are Katana body graphics on the profile as well and then there are three exhaust tips right ahead of the rear wheel. The wing mirrors and roof are finished is gloss black going very well with the overall demeanour of the Katana Edition. The Suzuki Katana is expected to make a comeback in 2020.

Now the Swift Katan Editon is not based on the India-spec Swift and so the chances of it getting a performance tuned verson of the 1.2-litre K-Series engine is ruled out. It's been designed for markets like Europe and Japan and we expect it to get the 1.4-litre turbocharged engine mated to either a 6-speed manual transmission or a CVT gearbox.