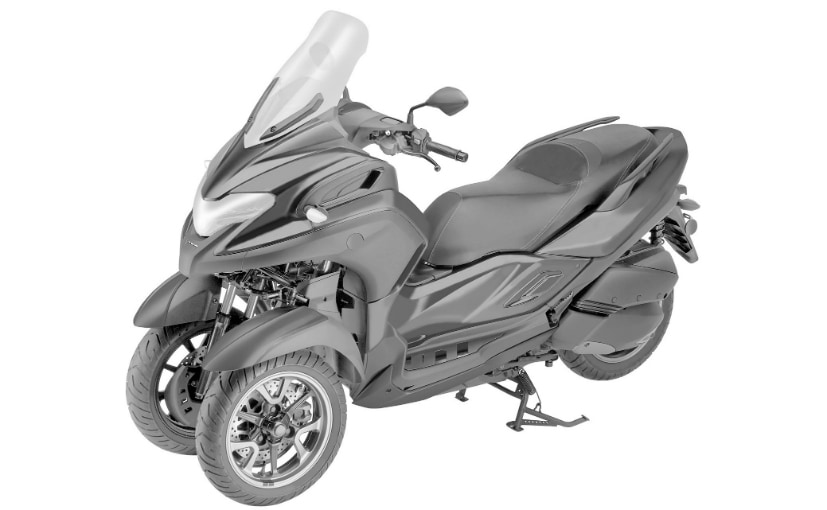 Yamaha has filed design patents for its upcoming leaning three-wheeled scooter, and it seems to be only a matter of time before the new Yamaha 3CT production model is unveiled. The 300 cc Yamaha 3CT was unveiled as a concept at the 2018 EICMA show in Milan, along with the Yamaha Niken GT sport-tourer with Yamaha's leaning multi-wheel technology. And now, the design patents reveal that the production model of the Yamaha 3CT will be almost similar to the prototype showcased at the EICMA show. The designs were filed with the European Union Intellectual Property Office, so it seems that the new 3CT will certainly be introduced in European markets, but there's still no confirmation of the model making its way to any of the Asian markets, including India. The Yamaha 3CT will be powered by a 300 cc engine

The bodywork seen on the design filings appears to be mostly unchanged from the prototype, including the peculiar beak-like nose up front. Part of the unique front suspension is also visible which shows off the mechanism that allows the two front wheels to tilt and steer in tandem. The overall design looks more or less similar to the prototype, apart from a taller windscreen, a slightly different seat, mirrors, turn signals and licence plate mount. The prototype unveiled at the EICMA show has a 300 cc Blue Core engine which puts out 27.6 bhp at 7250 rpm and 29 Nm of peak torque at 5750 rpm.

Now, the 3CT isn't Yamaha's first scooter using the leaning three-wheeled technology. In 2014, Yamaha introduced the 125 cc Tricity, which also uses the tilting three-wheeled technology in certain South East Asian markets, like Thailand and Japan, before being launched in European markets in 2015. In Asian markets, the Tricity was not so successful and even in Europe, it received mixed responses, but could not become as popular as Yamaha had expected. Now, with the Yamaha Niken getting some traction and interest in Europe, the more powerful, 300 cc Yamaha 3CT may be able to become commercially more successful than the Tricity. We expect Yamaha to showcase the production model sometime later this year.