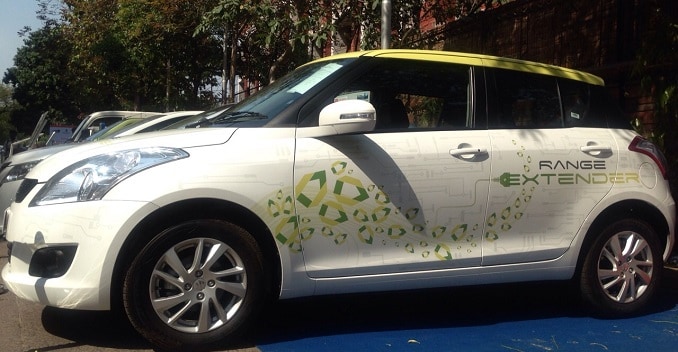 In an effort to lure buyers towards electric and hybrid vehicles in the country, the government of India recently introduced the FAME India Scheme - 'Faster Adoption and Manufacturing of Hybrid and Electric vehicles in India' - as a part of the National Electric Mobility Mission Plan. Under the new scheme, the Government announced to offer incentives on electric and hybrid vehicles of upto ₹ 29,000 for two-wheelers and ₹ 1.38 lakh for cars.

Carmakers like Tata Motors and Maruti Suzuki are working on such products for the Indian market. One such product could be the Maruti Swift Range Extender, which has been showcased at multiple events including FAME. However, the company has clarified that it will develop its hybrid models only after getting further clarity about the schemes and incentives. The hybrid model of the Swift, called the Range Extender, was earlier being developed for a pilot project that was to be supplied to the Government of India. However, after this announcement, it seems that the company might launch it for the public as well. Powered with a 658cc, 3-cylinder petrol engine paired to a permanent magnet synchronous motor, the vehicle is claimed to return an impressive 48.2Km/l of mileage. The vehicle has an electric driving range of about 25.5 Kms. Despite being a smaller capacity engine, it is good for 73bhp.

The Swift Range Extender weighs 1,600 Kg, and takes 1.5 hours to completely charge the lithium-ion battery through a 200V socket.