The TVS NTorq 125 is now offered in an entry-level version that gets a front drum brake set-up instead of a disc brake, which is about Rs. 1648 cheaper than the standard version. It misses out on a few features as well. TVS Motor Company has started rolling out the drum brake version of the NTorq 125 scooter at dealerships. The new entry-level TVS NTorq 125 drum brake variant is priced at ₹ 58,252 (ex-showroom, Delhi), which makes it about ₹ 1648 cheaper than the front disc brake version that is current available. The new drum brake variant makes the sporty scooter more affordable, especially in several other cities where the prices difference extends up to ₹ 4000, and will only help the scooter garner better sales.

The new TVS NTorq 125 base version comes with a 130 mm drum brake at the front as well as the rear. The higher versions get a 220 mm disc at the front for better stopping performance. The scooter does get CBS as a standard feature, keeping with the safety regulations that make the safety feature mandatory. Dealers also suggest that the new drum brake version of the NTorq has also skimped on a few features including the engine kill switch, underseat light and USB charger. Visually, the scooter gets no changes to denote this is the base variant, barring the missing front disc of course. 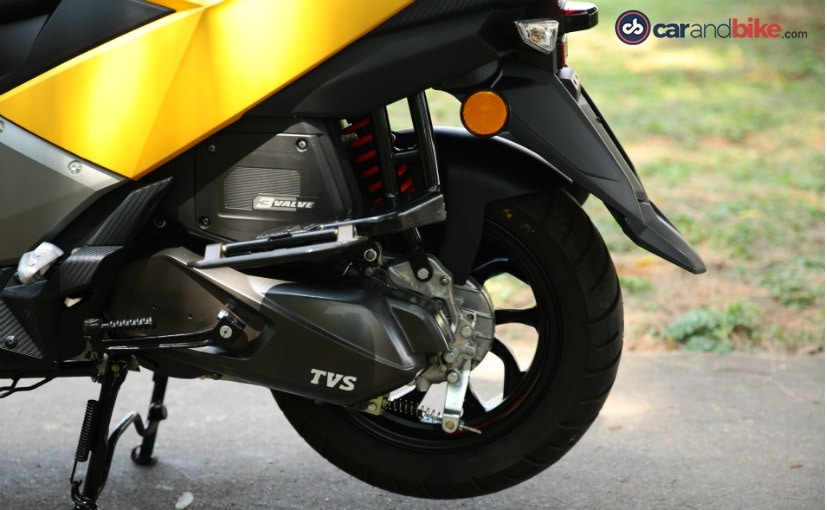 With respect to power, the TVS NTorq uses a 124.8 cc single-cylinder engine that is tuned to produce 9.27 bhp and 10.5 Nm of peak torque, while paired with a CVT unit. The scooter gets a well tuned suspension balancing between comfort and agility, while the peppy motor makes it quick off the line. The Smart Konnect Bluetooth connectivity system has also been liked by buyers that allows you to connect your smartphone with the scooter and provide access to navigation, call alert and SMS readout on the instrument console.

TVS has sold over one lakh units of the NTorq 125 since its launch and the scooter remains one of the top-selling models in its segment. The 125 cc offering competes against a number of offerings including the Honda Grazia, Aprila SR 125 and the Suzuki Burgman Street 125. The NTorq remains the most affordable of the three, but will soon face competition from the Hero Maestro Edge 125 that is expected to go on sale soon.