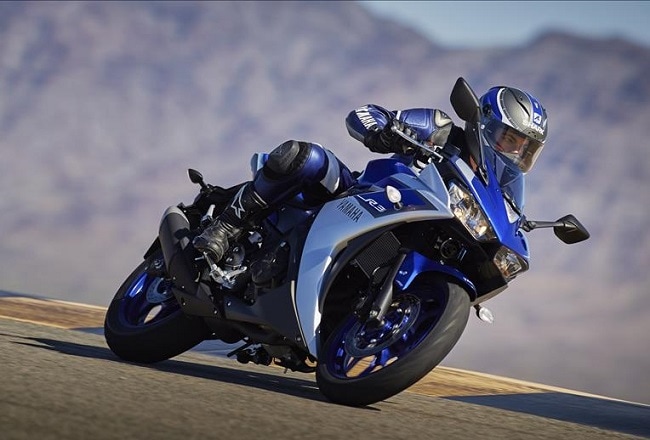 The much-anticipated Yamaha YZF-R3 has been finally launched in India today in the presence of Yamaha India's brand ambassador John Abraham. Available in two paint schemes - Blue & White and Red & Black, the R3 is priced at ₹ 3.25 lakh (ex-showroom, Delhi). The company said that the motorcycle's deliveries will begin from August 11, 2015 through 100 identified dealerships. The vehicle will rival KTM RC 390, Kawasaki Ninja 300 and others in the segment. The vehicle is brought to India as completely knocked-down unit and then assembled locally.

A more powerful version of the R25, the R3 made its debut at EICMA last year. The vehicle derives its power from a 320cc, twin-cylinder engine which is basically a bored out version of the R25's engine. Mated to a 6-speed transmission, this engine churns out a maximum power output of 41bhp at 10,750rpm and 29.5Nm at 9,000rpm. But its closest rival - the KTM RC390's engine churns out more power (43bhp) despite being a single-cylinder unit. The motorcycle takes about 2.89 seconds to hit the 60km/h mark from stand still, and 6 seconds to reach 100km/h. The bike offers a top-speed of 187km/h.

Coming to the design, the Yamaha YZF-R3 resembles the R25; but with a few changes the former looks sportier than the R25. Both the motorcycles share the diamond type frame, body panels and even dimensions. The R3 also takes some of its design elements from the YZF-R series such as dual head-lamps, digital-analogue console, silencer and 10-spoke alloy wheels. The motorcycle measure 1135mm in height, 2090mm in length, 1280mm in wheelbase and has a weight of 169kgs. The bike's 160mm of ground clearance is more than enough to tackle Indian road conditions.

Mahindra Trademarks 'The Scorpio Sting' Name; Could It Be The Next-Generation Scorpio Moniker?
51 minutes ago

2021 Honda Forza 350 Unveiled; Likely To Be Launched In India Next Year
32 minutes ago

Volkswagen Gauges Interest In Ducati Brand As A Prelude To Potential Sale: Report
3 hours ago

Mahindra Trademarks 'The Scorpio Sting' Name; Could It Be The Next-Generation Scorpio Moniker?
5 hours ago