The mural has been created in Delhi near Connaught Place and has some prominent Indian women, celebrating their massive achievements on the occasion of International Women's Day. It's International Woman's Day today and a special day indeed where we celebrate feminism, diversity, equality and the immense contributions women have made around the world. Celebrating the amazing feat of Indian women on this extremely special day, MG Motor India created a special mural in Delhi at Gole Market, near Connaught Place. The mural features some of the most prominent women from India that scaled new heights with their work, while also including the all-female team that built the 50,000th MG Hector at the company's manufacturing facility recently.

Among the women who feature in the mural include notable names like the late Kalpana Chawla and retired wing commander of the Indian Air Force Namrita Chandi. The mural was created on an outer wall of a school, which the automaker helped restore. 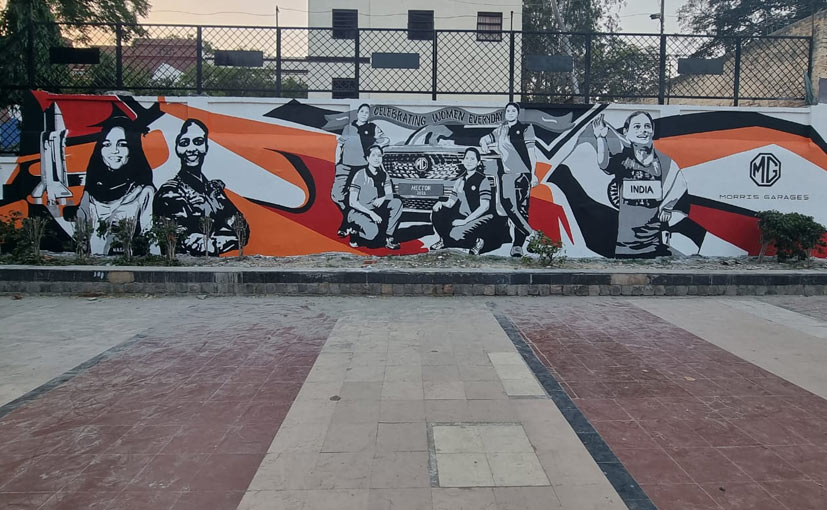 The mural has been created in Gole Market in Delhi and is the wall of a school, which the automaker helped restore

MG Motor India has been vocal about its diversity in operations in India. The company's 33 per cent workforce include women at the Halol plant and it plans to scale it up to 50 per cent in the future. More recently, the automaker had released details about the making of its 50,000th Hector that saw an all-women crew building the SUV.

Not just MG Motor India but other manufacturers have also been inclusive of having more women work on the assembly line at OEM manufacturing facilities. Bajaj Auto had previously announced that the Chetak was being built by an all-women crew, while we saw a healthy mix of men and women working together at the Ather plant in our recent visit.

However, these remain just one-off examples of women contributing to the auto sector. According to a study by Catalyst.org, the global automotive industry showed little progress in gender diversity among executive teams. In 2018, only 16 women or about eight per cent were top executives in the top 20 motor vehicles and parts companies in the Fortuner Global 500. It's safe to say then that it's still a long way to go to normalise having women and their sheer contributions in the automotive workforce. Until then, it's important to acknowledge and celebrate the achievements of every woman going out there and making a difference.