The October 2019 sales figures are the highest that Honda has touched in FY2019-20 so far. 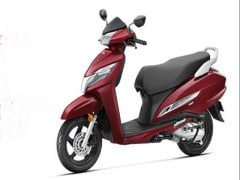 View Photos
Despite the slowdown, Honda managed to not go into the negative

Honda Motorcycle and Scooter India sold 517,808 units in October 2019 as compared to 521,159 units sold in October 2018, which is a growth of 0.64 per cent. The monthly sales figures are the highest that Honda has touched in FY2019-20 so far. Honda says that the company received strong festive demand from all regions and the company registered 7 per cent growth over September 2019. While domestic sales grew 7 per cent to 487,782 units, exports grew by 1 per cent to 30,026 units in October 2019 as compared to October 2018. If we compare the sales figures for October 2019 and November 2018, the sales of the festive seasons this year and last, the total sales again stayed flat only.

The Honda Activa also cemented its leadership as India's highest selling two-wheeler in first 6 months of FY2019-20 for the period of April-September 2019 as reported by the Society of Indian Automobile Manufacturers or SIAM.