We pip the AMT versions of the Renault Kwid 1-litre up against the Tata Tiago to see which small hatchback is perfect for the first time automatic car buyer. 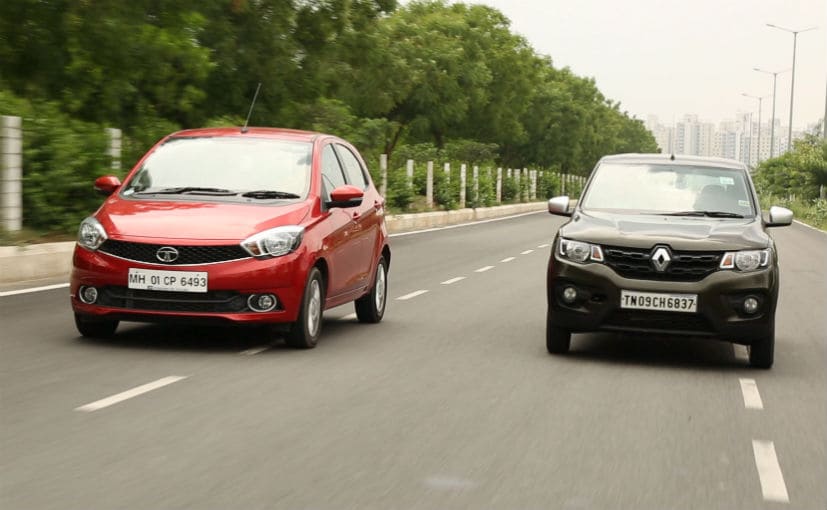 With traffic becoming nearly unbearable in the metros and in some tier 2 towns too (especially at rush hour) it is no wonder that the automatic car is finally gaining popularity in India. In today's day and age, almost every single manufacturer offers an automatic option in their popular cars in some form or the other. From the expensive but lighting quick dual clutch gearboxes to the traditional torque convertor to the urban traffic friendly continuously variable transmission or CVT, there is something for everyone. But there is one type of automatic gearbox that has brought the technology to the masses - the automated manual gearbox or AMT. Essentially an AMT gearbox is a manual transmission underneath with an automatic electronic shifter module attached on top. The Tata Tiago and the Renault Kwid have both raked in high sales figures with their manual avatars but are also available in AMT versions. So lets see how they stack against each other. 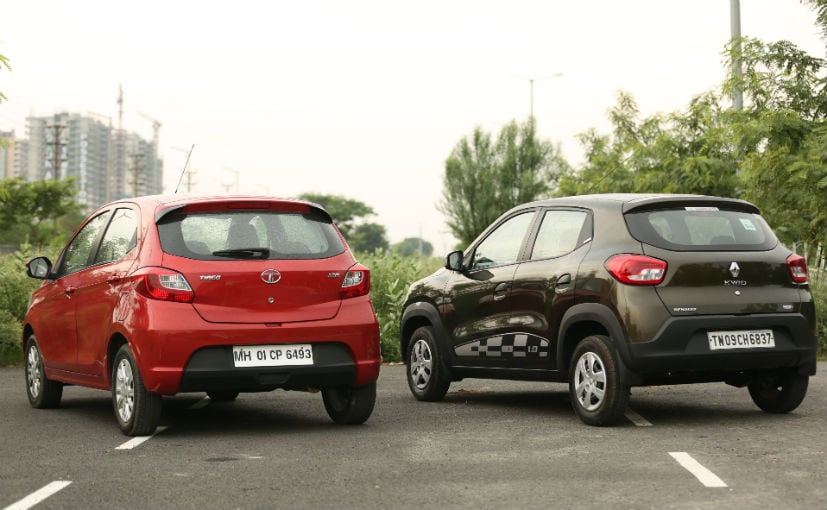 Lets begin with the Exterior design. Where the Tata Tiago looks conventional and chic in a very European way, the Kwid looks made for India to the T! Both offer a very distinct design approach and in our opinion, if we were to score both, they would both be scored identically out of 10. The Kwid offers an SUV look - a gamble that has clearly paid off for Renault. The wide wheel arches that have been squared out and the chequered flag livery on this standard 1-litre version does look quite cool in its own way and so does the upright stance. 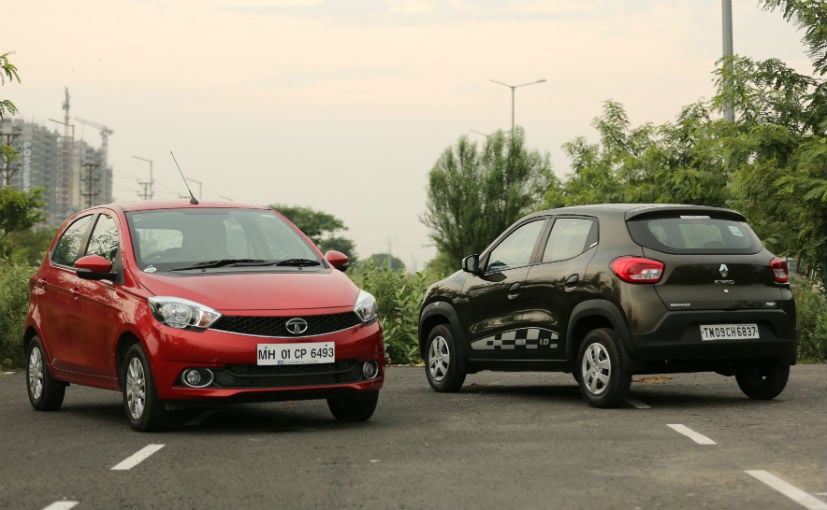 (Both hatchbacks look very cool in their own distinct way)

The Tiago on the other hand, as we mentioned earlier, looks like a hatchback would conventionally look and does a damn good job at it. On the higher versions the Tiago offers standard fittings like alloy wheels, something that the Kwid does not. The Tiago also offers a little better road presence as is larger than the Kwid when it comes to length, width and height. The Kwid though does offer more wheelbase due to the fact that its wheels are stretched right to the 4 corners of the car. 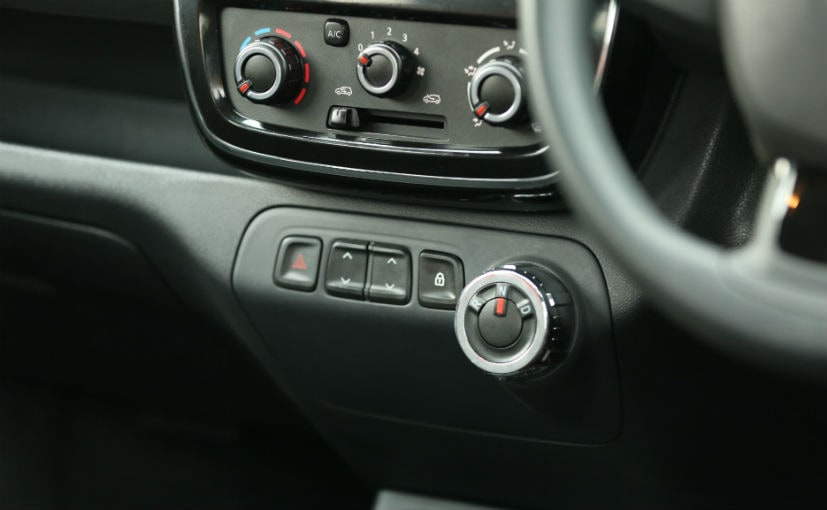 Moving to the interior, the Kwid and Tiago are again very very close. While the Tiago offers a much better put together interior in terms of plastic quality, fit and finish and overall appeal, the Kwid offers features galore. The Tiago does not get a touchscreen infotainment system and navigation like the Kwid does and in 2017, features like those do actually make the difference for the average buyer. In terms of space though, both are about evenly matched. The Tiago does have a slightly more spacious cabin as compared to the Kwid and feels airier. Boot space though is a victory that the Kwid wins hands down with massive 300 litres of storage space as compared to the Tiago's 242. 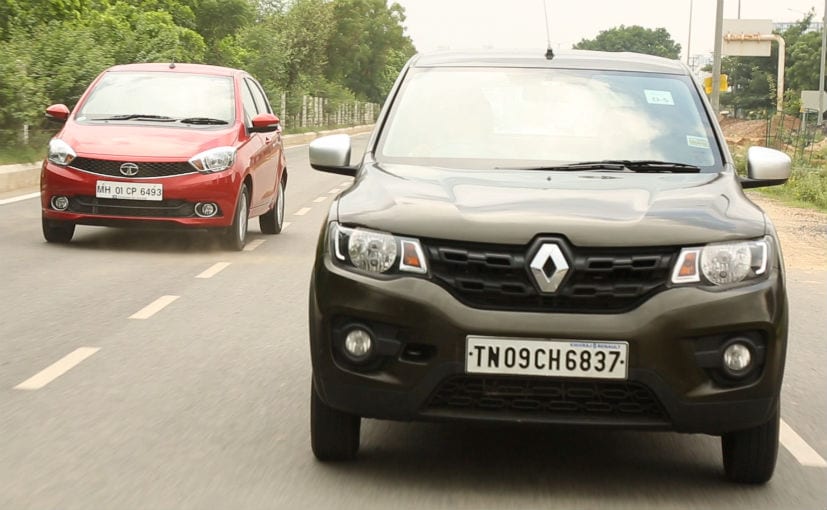 (The Renault Kwid Automatic performs well in the city)

Under the bonnet, the Kwid gets a buzzy little 1-litre three cylinder motor that makes 67 bhp and 91 Nm. The gearbox is a 5-speed AMT unit that has been mated to a rather unconventional shifter knob instead of a normal lever between the front seats. The engine isn't very refined but does offer decent performance while combined with the AMT unit. However, it is more suited to urban driving as it really does seem to lack performance on the highway. Jerks between shifts are present but not as intrusive as one might expect and as with any AMT, the way the gearbox reacts can be modulated by the amount of throttle input the driver gives. 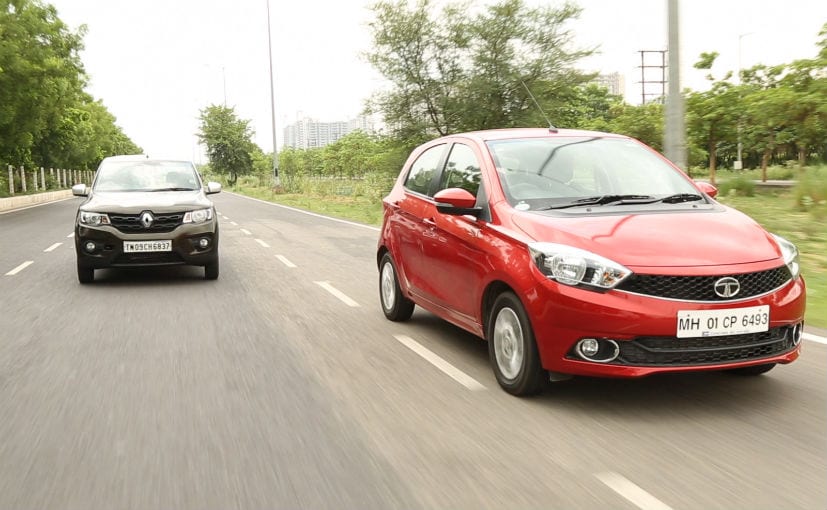 The Tiago gets a 1.2-litre 3-cylinder Revotron unit that makes 84 bhp and 114 Nm of torque - which when compared to the Kwid is 17 more horsepower and 23 more newton metres of torque. And the difference is almost immediately obvious. The 5-speed AMT unit is also much smoother in the Tiago as compared to the Kwid. In fact, in my opinion, the AMT unit in this car is actually geared better than even the manual. The lag in power is almost negligible and even shift shock between gears (as compared to the Kwid) is minimal. The Tiago also gets a traditional shifter, which we think a lot of drivers who are new to the automatic gearbox will appreciate and it gets a sport mode. Strangely though, unlike the Tata Nano where you need the sport mode constantly, the standard driving mode in the Tiago actually feel much much better than the edgier and constantly jerky 'sport'. 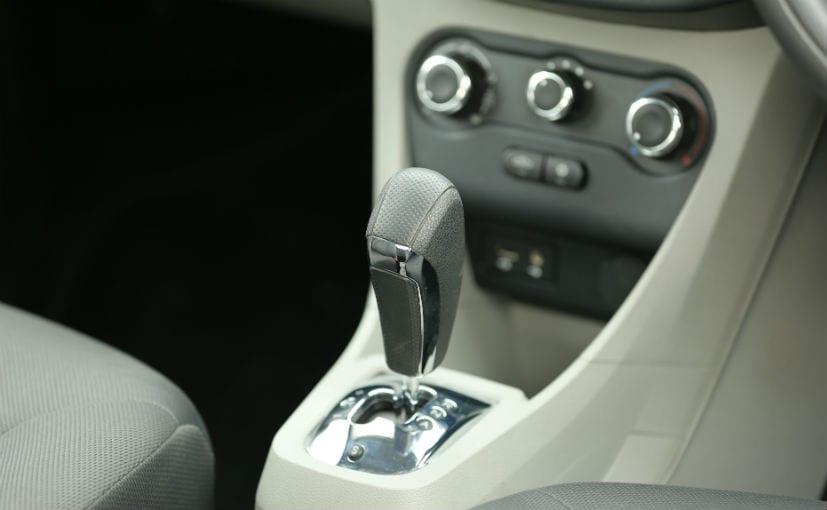 The Tiago also pips the Kwid when it comes to driving dynamics. And by a considerable margin! Not only is it the better car when it comes to handling characteristics, it also rides much better thanks to its larger wheels and tyres and of course, its superior chassis tune. The Tiago is also safer! It brakes much quicker as compared to the Kwid (which does not have ABS) as the Tiago has ABS as standard on the AMT variants. And it also gets two airbags are standard in the AMT variants while the Kwid gets only one optional drivers side airbag. 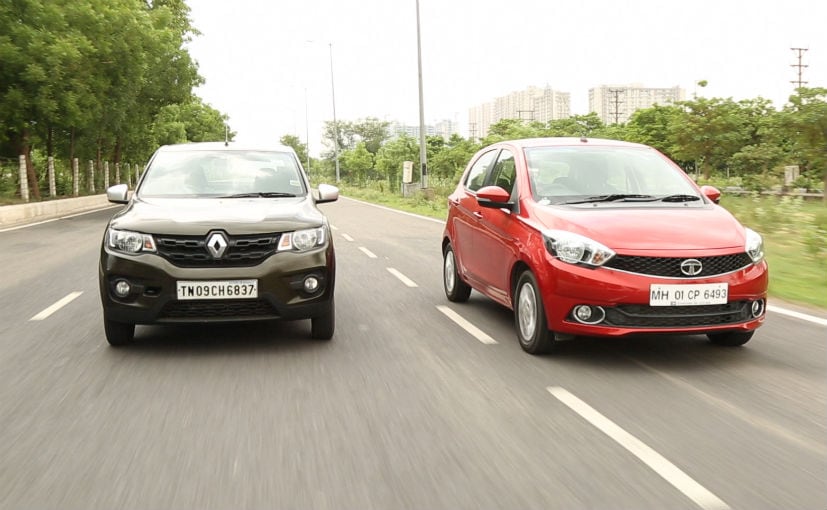 When you compare prices outright, the Kwid AMT ranges from Rs 3.78-4.49 lakh (ex-showroom) and is available in four variants. The Tiago on the other hand is priced between Rs 4.79-5.39 lakh (ex-showroom) and is available only in two variants. And that is nearly one lakh more expensive. So is the extra cost worth it? Well, the Kwid might be better equipped with that touchscreen infotainment setup but the Tiago is a better package. It is better built, safer and most importantly, drives better too. Most certainly the one we would recommend!