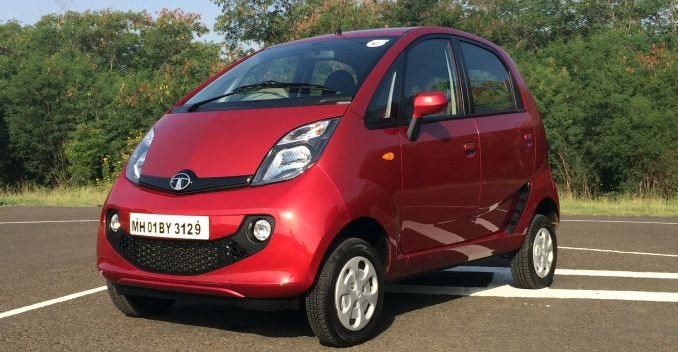 The much-anticipated 2015 Tata Nano GenX has been finally launched in the Indian market today at a staring price of ₹ 1.99 lakh (ex-showroom, Delhi). The newly introduced AMT (Easy Shift) version, however, starts at ₹ 2.69 lakh (ex-showroom Delhi). With the new model, Tata Motors is aiming to revive the Nano brand and position it as a more up-market product. In fact, the entire campaign designed for the car is to project it as a 'smart city car', thus getting away with the 'cheap' tag that went against the brand in the past.

Now with a more up-market cabin, slightly updated engine, bigger fuel tank and exterior changes, the company is aiming to reach to a larger audience base. While the 2015 Tata Nano's exterior and interior look slightly different, the addition of an automated manual transmission and openable hatch are the two most significant changes given to the hatchback. Just so you know, the 5-speed AMT is the same unit that is found in the Tata Zest diesel AMT version. Talking about its exterior design, the Tata Nano GenX 2015 gets new smoke headlamps, alloy wheels, Tata signature grille and an openable boot. The boot is claimed to offer a luggage carrying capacity of 110-litres. The car with a larger fuel tank (24-litres) now offers a range of over 450kms. Earlier, the car had 15-litres of fuel capacity.

As mentioned before, the Tata Nano's engine, 624cc, two-cylinder MPFI petrol, remains the same, though the company has added a new cylinder head and aluminium block to help the car run smoother than before. That said, it continues to churn out a maximum power output of 38bhp and 51Nm of peak torque. The powertrain is offered with both a 5-speed AMT gearbox and the regular 4-speed manual transmission. The AMT gearbox is offered only with the Easy Shift trim, while other trims come with a manual gearbox.