The 2018 Kawasaki Versys 650 is now on sale in India with new paint options and graphics, while the 650 cc twin-cylinder engine continues to remain the same. 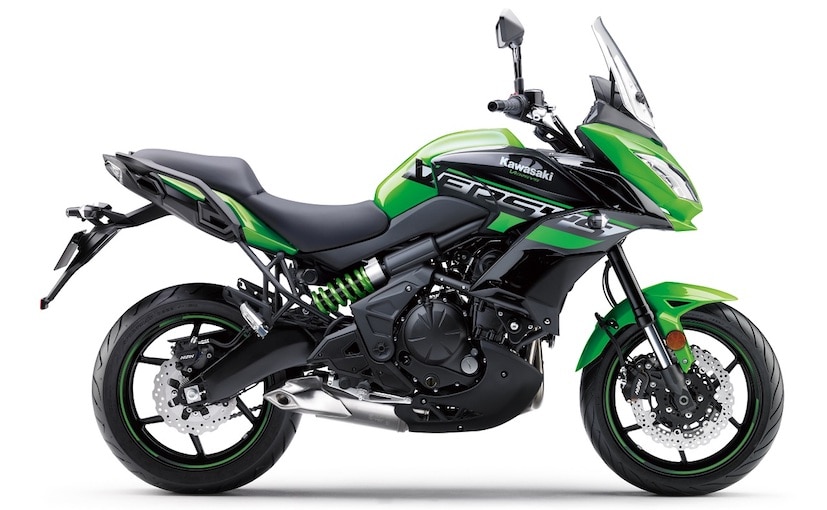 India Kawasaki Motor has silently introduced the 2018 edition of the Versys 650 adventurer tourer in the country. The 2018 Kawasaki Versys 650 is priced at ₹ 6.50 lakh (ex-showroom) and gets new graphics, while the green and black paint scheme continues to remain the same. There have been no substantial upgrades to the mechanicals either with the 650 cc twin-cylinder engine continuing to serve purpose on the middleweight motorcycle. The Kawasaki Versys 650 is one of the more capable adventure tourers in the country. The parallel-twin cylinder motor on the 2018 Kawasaki Versys 650 churns out 68 bhp at 8500 rpm and 64 Nm of peak torque available at 7000 rpm. The engine is paired to a 6-speed transmission. Other components have been carried over as well including 41 mm Inverted telescopic forks at the front and an offset monoshock setup with remote spring adjustable preload at the rear. Braking performance comes from a 300 mm disc up front and a 250 mm single disc at the rear. The Versys 650 received Anti-Lock Brakes (ABS) right from the start and the safety feature remains unchanged on the 2018 edition as well. The bike rides on 17-inch alloy wheels.

The Kawasaki Versys 650 received a substantial update in 2017 with the instrument console getting a gear position indicator alongwith an adjustable fly screen. That's why, the subtle updates on the 2018 model is understanble. Moreover, it is reported that an all-new Versys 650 is under development that will be borrowing its underpinnings from the new Ninja 650. Expect to see improved off-roading capabilities on the all-new Versys as well as sharper styling and improved performance.

(An all-new Kawasaki Versys 650 is in the works)

Barring the Benelli TNT 600 GT, the Kawasaki Versys 650 does not have a direct rival in the country and continues to be a highly lucrative choice in its segment and price bracket. The model is already available for booking at Kawasaki dealerships across the country, while deliveries should commence in a few weeks.