Auto Expo 2018: The Yamaha YZF-R3 gets subtle upgrades for 2018 including a BS-IV compliant engine, refreshed graphics and dual channel ABS. 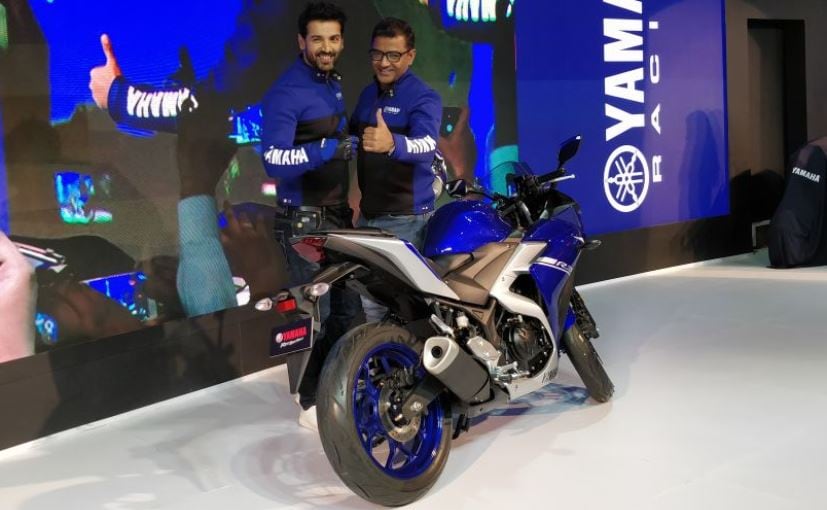 Yamaha Motor India has launched the updated YZF-R3 motorcycle in the country priced at ₹ 3.48 lakh (ex-showroom, Delhi). The full-faired offering makes a comeback to the Indian market after nearly a year, since the manufacturer had pulled the bike off its shelves by not upgrading it to be compliant to BS-IV emission norms in April 2017. The bike was launched by bike enthusiast, Bollywood actor and Yamaha's brand ambassador John Abraham. India now gets the 2018 edition of the Yamaha R3 that gets subtle changes for the new year and was unveiled globally in November, 2017.

Changes to the 2018 Yamaha R3 include cosmetic upgrades including new colour options and graphics - Racing Blue and Magma Black. The mechanicals continue to remain the same, as the bike is powered by the same 321 cc in-line, twin-cylinder, liquid-cooled engine tuned to produce 41 bhp at 10,750 rpm and 29.6 Nm of peak torque at 9000 rpm. But now the engine is BS-IV compliant and to the makes things better Yamaha now also offers dual channel ABS (anti-lock braking system) as standard. The engine is paired to a 6-speed gearbox.

On the features front, the new Yamaha R3 now also comes with new sticker Metzeler radial tyres while rest of the offerings remain unchanged. Suspension duties are performed by 41 mm Kayaba forks up front and a monoshock unit at the rear. Braking performance comes from 298 mm front and a 220 mm rear disc brakes.

The Yamaha R3 continues to be a highly likeable motorcycle from the Japanese manufacturer and it has been liked by many for its touring capabilities. The bike comes to in India as a CKD unit from Indonesia, which is where the bike is manufactured for all markets.